Police in the Iranian capital, Tehran, have denied using live ammunition against protesters outraged by the shooting down of a Ukrainian airliner. 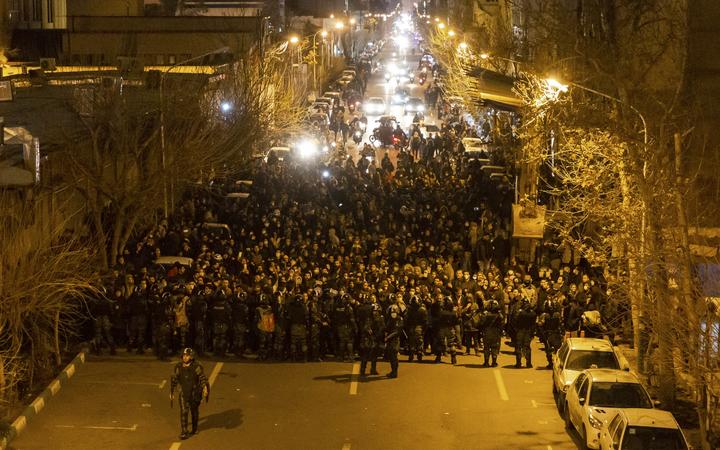 Officers had been given orders to "show restraint", the chief of police said.

Videos posted online on Sunday recorded what appeared to be gunfire and showed an injured woman being carried away.

Sunday's demonstrations went on late into the night, as people vented their fury against the Iranian government and the powerful Revolutionary Guards, who shot down the Ukrainian plane.

There were reports that a number of people were injured when security forces broke up a protest in Tehran's Azadi Square, during which people chanted "death to the dictator" - a reference to Supreme Leader Ayatollah Ali Khamenei.

One video posted on social media allegedly shows members of the paramilitary Basij Resistance Force, which is often used to suppress domestic dissent, attacking protesters in the area. What appears to be gunfire can be heard.

Another video shows an injured woman being carried away by people who shout that she has been shot in the leg. A pool of blood is seen on the ground.

Despite such footage, Tehran police chief Brig-Gen Hossein Rahimi insisted that his officers did not fire live ammunition at protesters, as security forces did when cracking down on mass anti-government demonstrations in November.

"The police treated the people who had gathered with patience and tolerance," he said, before warning that "those who intend to manipulate the situation" would face consequences. 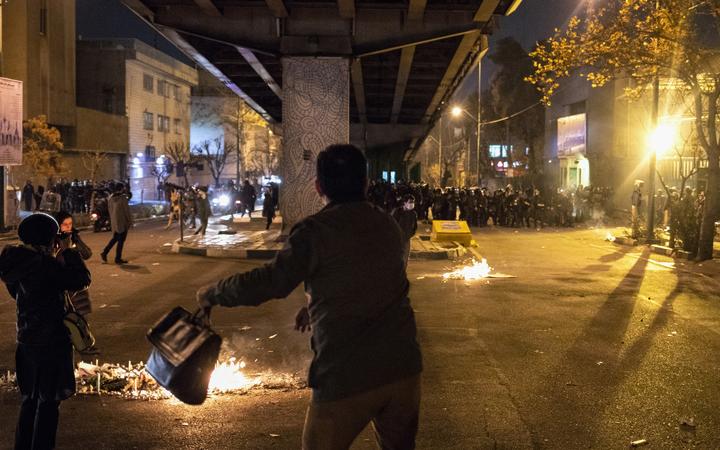 Prominent Iranians also added their voices to the protests.

The captain of the national men's volleyball team, Said Marouf, wrote on Instagram about "oppression" in Iran. In an apparent reference to the shooting down of the plane, he said he hoped Iran has seen its "last show" of "deceit and stupidity".

And one of Iran's most famous actresses, Taraneh Alidoosti, posted that Iranians were being treated not as citizens but as "hostages".

Over the weekend Iran's only female Olympic medallist said she had defected.

The protests erupted on Saturday, after Iran admitted firing missiles by mistake at the Ukraine International Airlines jet that crashed near Tehran.

All 176 people on board flight PS752, mostly Iranians and Canadians, were killed.

For the first three days after the crash, Iran denied that its armed forces had shot down the plane and suggested there had been a technical failure.

The admission of responsibility, which came after video emerged of a missile appearing to hit the plane, provoked widespread anger in Iran against the ruling establishment.

Days earlier, Iranians had been united in grief over the killing of General Qasem Soleimani, their country's second most powerful leader, in a US drone strike in Iraq.

The latest reports of a possible crackdown echo the protests in Iran in November over rising fuel prices. Human rights groups say scores of people were killed.