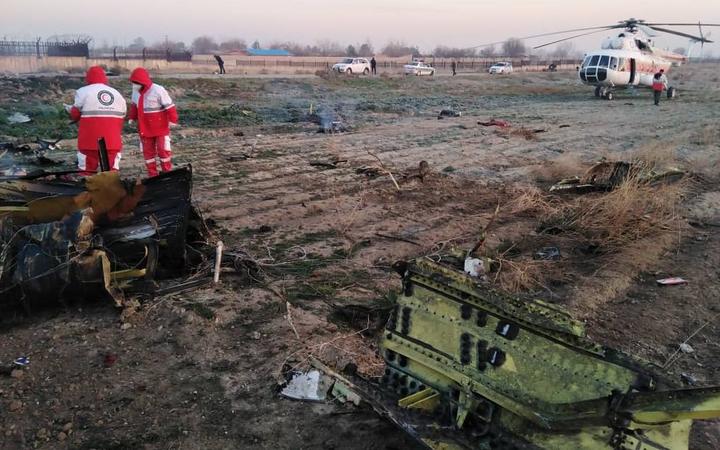 The Boeing 737 belonging to Ukraine International Airlines crashed near the airport and burst into flames. Iranian TV said the crash was due to technical problems but did not elaborate. 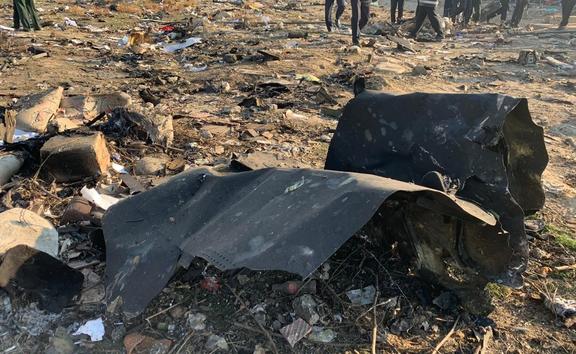 Ukraine's embassy in Iran said the plane had suffered engine failure and the crash was not caused by "terrorism".

Ukraine President Volodymyr Zelenskiy said there were no survivors.

"My sincere condolences to the relatives and friends of all passengers and crew," Zelenskiy said in a statement, adding that Ukraine was seeking to establish the circumstances of the crash.

Zelenskiy said he had instructed the Ukraine's prosecutor general to open criminal proceedings into the crash and that the airworthiness of the entire civilian fleet would be tested.

Iranian state TV and Ukraine's prime minister said 167 passengers and 9 crew were on board. Iranian TV said 32 of those on board were foreigners.

Ukraine's Foreign Minister Vadym Prystaiko said there were 82 Iranians and 63 Canadians on board.

Detailing the casualties on Twitter, he also said there were 11 Ukrainians on board including nine crew, 10 from Sweden, four passengers from Afghanistan, three from Germany, and three from Britain.

Iranian state broadcaster IRIB said on its website that one of the plane's two black boxes - the flight data recorder and the cockpit voice recorder - had been found. 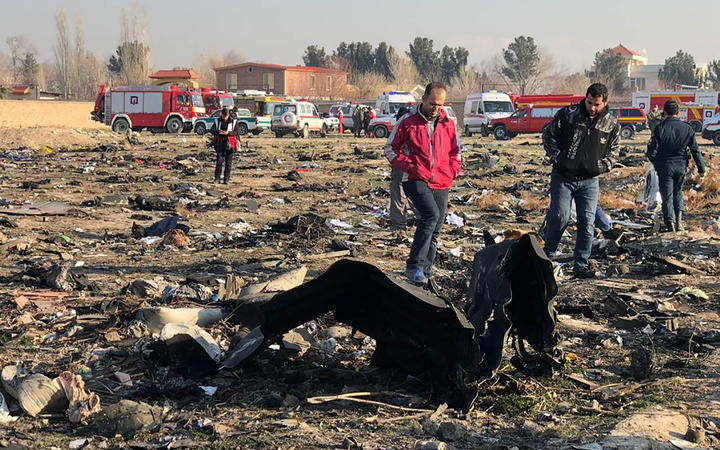 People walk near the wreckage after a Ukrainian plane carrying 176 passengers crashed near Imam Khomeini airport on January 8, 2020, killing everyone on board. Photo: AFP

Iranian media quoted an Iranian aviation official as saying the pilot of the airliner did not declare an emergency. It Ukraine International Airlines first fatal crash.

The Kiev-based airline company said that a Boeing 737-800 involved in a fatal crash in Iran was one of the best planes in its fleet and that its pilots were very experienced.

Airline officials said there was no sign that anything was wrong before the plane took off from Tehran's Imam Khomeini airport and that it had last been routinely serviced on 6 January.

They added that most of the passengers were in transit and due to connect to other flights on arrival in Ukraine.

"The fire is so heavy that we cannot (do) any rescue... we have 22 ambulances, four bus ambulances and a helicopter at the site," Pirhossein Koulivand, head of Iran's emergency services, told Iranian state television.

Television footage showed debris and smouldering engine parts strewn across a field, and rescue workers with face masks retrieving bodies of the victims. 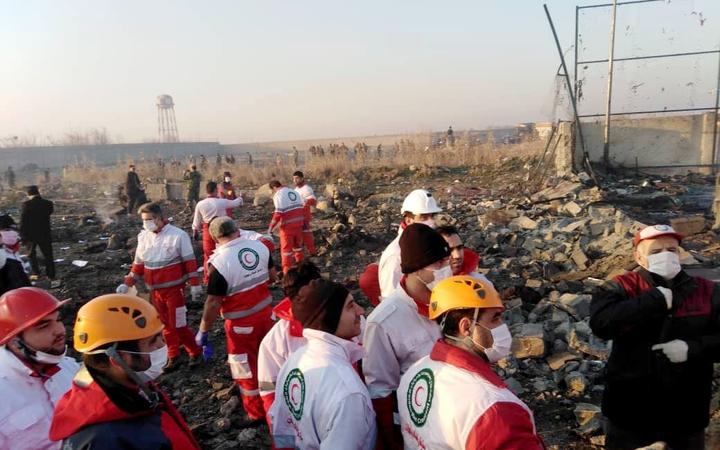 Search and rescue works are conducted at site after a Boeing 737 plane belonging to a Ukrainian airline crashed near Imam Khomeini Airport in Iran on January 08, 2020. Photo: Iranian Red Crescent / AFP

Footage posted online appears to show the plane in flames before crashing into the ground.

#Breaking First footage of the Ukrainian airplane while on fire falling near #Tehran pic.twitter.com/kGxnBb7f1q

According to air tracking service FlightRadar24, the plane that crashed was Flight PS 752 and was flying to Kiev. The plane was three years old and was a Boeing 737-NG, it said.

The model's twin engines are made by CFM International, a US-French venture co-owned by General Electric and France's Safran.

Modern aircraft are designed and certified to cope with an engine failure shortly after take-off and to fly for extended periods on one engine. However, an uncontained engine failure releasing shrapnel can cause damage to other aircraft systems.

A spokesman for Boeing said the company was aware of media reports of a plane crash in Iran and was gathering more information. The plane manufacturer grounded its 737 MAX fleet in March after two crashes that killed 346 people.

The 737-800 is one of the world's most-flown models with a good safety record and which does not have the software feature implicated in crashes of the 737 MAX.

Under international rules overseen by the United Nations, Iran is responsible for leading the crash investigation.

Ukraine would be involved and the United States would usually be accredited as the country where the Boeing jet was designed and built. France, where the engine maker CFM has half its activities, may also be involved.

There was no immediate word on whether the US National Transportation Safety Board would be involved in the probe amid escalating tensions between the US and Iran. The NTSB usually invites Boeing to give technical advice in such investigations.

We are following reports that a Ukrainian 737-800 has crashed shortly after takeoff from Tehran. #PS752 departed Tehran at 02:42UTC. Last ADS-B data received at 02:44UTC. https://t.co/qXWHUPGDTu pic.twitter.com/vuAi6TOqTp