A 99-year-old Australian swimmer appears to have smashed a world record for his age group in the 50m freestyle. 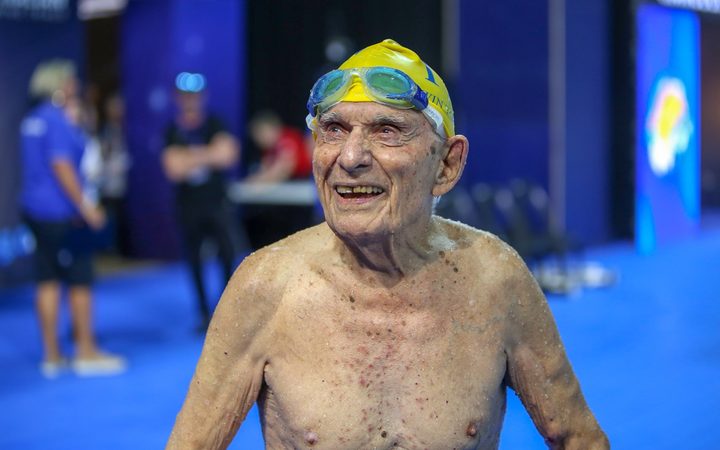 George Corones clocked 56.12 seconds at an official event in Queensland - a new benchmark for the 100-104 age category.

He eclipsed the previous mark, set in 2014, by 35 seconds. It will now be verified by the sport's governing body.

Mr Corones, who is eligible for the record because he turns 100 in April, said he was "quite delighted" and "over the world" by the result.

"It was an exemplary swim for me, well balanced... and I was ready to hit the [wall] at the end very hard with my hand," he told the BBC.

He said he had been overwhelmed by the "roaring" crowd on the Gold Coast. The event, in which he was the sole entrant, had been specifically staged for him to challenge the record.

'It takes a while to get going'

Mr Corones, from Brisbane, said he was a keen swimmer in his youth but only began swimming again aged 80.

"I gave it up at the beginning of the war [World War Two], and I don't think I had a swim of any description until I retired," he said.

"I started swimming again for exercise."

He said racing "undeniably" challenged him physically, but it was manageable with preparation. On average he swims laps three times a week, and also fits in gym sessions.

"At this age it takes a while to get going... you get exhausted much more easily, but if you do it sensibly, the rewards are astronomical," he said.

He attributed his success to his pacing and technique.

"My first dozen strokes were well balanced and the trick is to just carry it on progressively, putting a little bit of increasing effort in each stroke," he said.

"I did that until the last 10m - I knew I was tired and done - but went on without any disturbance."

Mr Corones's race took place just before the Australian Swimming Trials for the Commonwealth Games, which will begin on the Gold Coast next month.

Mr Corones will challenge the 100m freestyle record on Saturday night, believing he can beat the current mark of 03:23.10, which was also set by Mr Harrison.

"I'm not a young man by any means, but I am really looking forward to it and confident I can do very well," he said.