Hurricane Irma has been upgraded to a powerful category four, with warnings issued for several Caribbean islands in preparation for the storm. 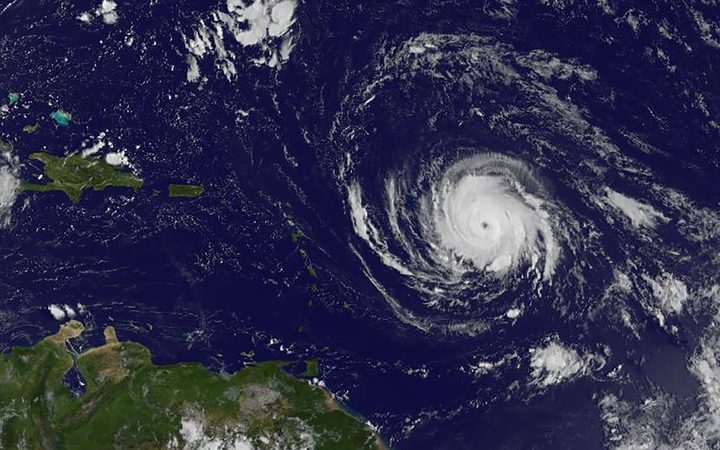 This image from NASA's GOES Project shows Hurricane Irma bearing down on the Caribbean. Photo: AFP

The hurricane has sustained winds of up to 215 km/h and is likely to strengthen in the next 48 hours, the US National Hurricane Center (NHC) said.

The US state of Florida has declared a state of emergency.

It comes as residents in Texas and Louisiana are reeling from the effects of Hurricane Harvey, which struck as a category four storm, causing heavy rain and destroying thousands of homes.

However the NHC warned that it was too early to forecast Irma's exact path or effects on the continental US.

Irma was set to reach the Leeward Islands, east of Puerto Rico, by late Tuesday or early Wednesday (local time), the centre said.

It may cause rainfall of up to 25cm in some northern areas and raise water levels by up to 3m above normal levels, it said.

Puerto Rico also declared a state of emergency and activated the National Guard. Governor Ricardo Rossello announced the opening of emergency shelters able to house up to 62,000 people, and schools would be closed on Tuesday.

Hurricane warnings have been issued for the islands of Antigua and Barbuda, Anguilla, Montserrat, St Kitts and Nevis, St Martin, Sint Maarten, St Barthelemy, Saba and Sint Eustatius. Hurricane conditions are expected in the next 36 hours.

A hurricane watch is in effect for some of the more populous parts of the Caribbean, including Puerto Rico, Guadeloupe, British Virgin Islands and US Virgin Islands, meaning that hurricane conditions are possible within 48 hours.