The devastating storm that swept through Texas has made a second landfall in Louisiana, drenching the region. 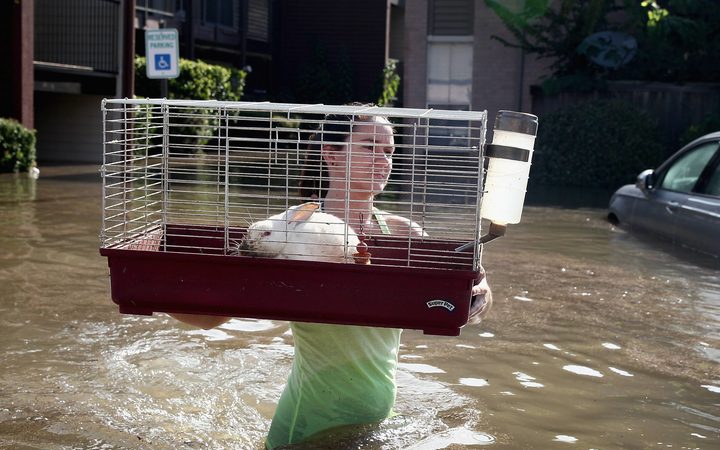 A rabbit is carried to a rescue boat after it was found floating in floodwater in Houston, Texas. Photo: AFP

Flash-flood warnings have been issued for the state's south.

Large parts of the Texas city of Houston are underwater, and more than 20 people are reported dead. Thousands of people there have fled their homes.

However, forecasters say the weather is now improving in Texas. Sun is predicted for Houston in the days ahead, potentially allowing respite and a chance to tackle the damage.

Houston, America's fourth most populous city, is under a night-time curfew to prevent looting while homes remain abandoned. Relief volunteers, first responders, and those going to and from work are exempt.

Authorities and volunteers are also still battling to rescue stranded people and provide shelter for those made homeless by the rising waters. 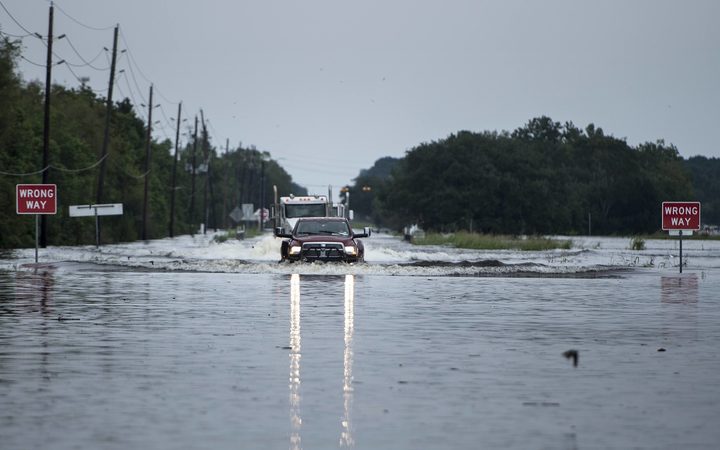 In Louisiana, the storm landed in the south-west corner of the state, around Cameron, in the early hours of Wednesday (local time). It is predicted to travel in a north-easterly direction, weakening as it goes.

The National Weather Service said heavy rainfall was expected from Louisiana to Kentucky over the next three days.

Flash-flood warnings remain in effect for parts of southern Louisiana and southern Mississippi. New Orleans - which was devastated by 2005's Hurricane Katrina - is not in the storm's direct path, according to forecasters.

Houston Police confirmed on Tuesday that veteran officer Sergeant Steve Perez is among those who have been killed. He was caught in a flooded underpass while driving to join the rescue efforts on Sunday.

A family of six - two great-grandparents and four children - have also reportedly drowned after trying to flee the city's floods in a van.

Authorities have not yet confirmed the deaths, but relatives - including an uncle who was driving and escaped - have spoken to the media.

Authorities are reminding people not to drive - many of the casualties happened on the roads as people underestimated the power of the water. On social media, officials are repeating their mantra "Turn around, don't drown" to stop people heading out into difficult situations.

He arrived in Corpus Christi, where Hurricane Harvey first made landfall on Friday, with First Lady Melania Trump.

Mr Trump said he wanted the relief effort to stand as an example of how to respond to a storm.

"We want to do it better than ever before.

"This storm, it's epic what happened. But you know what, it happened in Texas and Texas can handle anything."

He will not be visiting Houston. The White House said he did not want his visit to disrupt the emergency response.

Major flooding underneath I-10 near Walden. pic.twitter.com/0SG8VjcMYI

Mr Trump has declared a federal state of emergency in both Texas and Louisiana. The move releases emergency government funding and other assistance.

Harvey was the most powerful hurricane to hit Texas in more than 50 years when it made landfall at Corpus Christi, 220 miles 354km southwest of Houston. For several days the storm continued dumping huge amounts of rain over already flood-hit areas.

The rainfall in Texas set a new record for the continental US, the National Weather Service said on Tuesday.

A rain gauge in Cedar Bayou recorded 1.32m of rain since Friday.