Texas Governor Greg Abbott has warned that severe flooding is his main worry as the rains from Tropical Storm Harvey continue to lash the state. 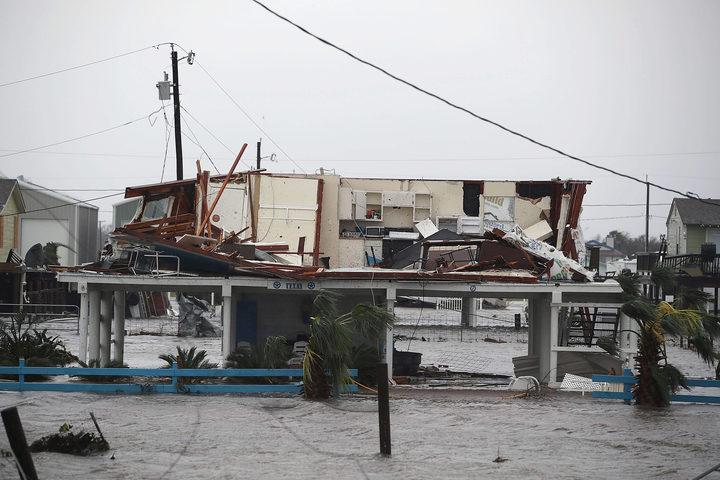 A damaged home in Rockport, Texas after Harvey made landfall. Photo: AFP

Mr Abbott said the cities of Houston and Corpus Christi had already received as much as 50cm of rain.

He said another 100cm of rain could be due before the storm subsides midweek.

Rescue efforts are being hampered by strong winds and thousands are without power. There have now been two deaths confirmed, the first in the town of Rockport and the second fatality has been identified as a woman who drowned when she drove through flooded streets in Houston.

Houston, the fourth biggest city in the US, could see 5cm-7.5cm of rain an hour on Saturday night, Mayor Sylvester Turner said.

About 4500 inmates from prisons south of Houston are being evacuated to other prisons in east Texas because the Brazos River nearby is rising significantly, officials say.

Harvey began as a major category four hurricane - the first to make landfall in the US in 12 years - before it was downgraded to a tropical storm later on Saturday.

Mr Abbott warned of the "potential for very dramatic flooding" from the storm while expanding a declaration of emergency in the state from 30 counties to 50.

He has mobilised 1800 military personnel to help with rescue and repair operations. 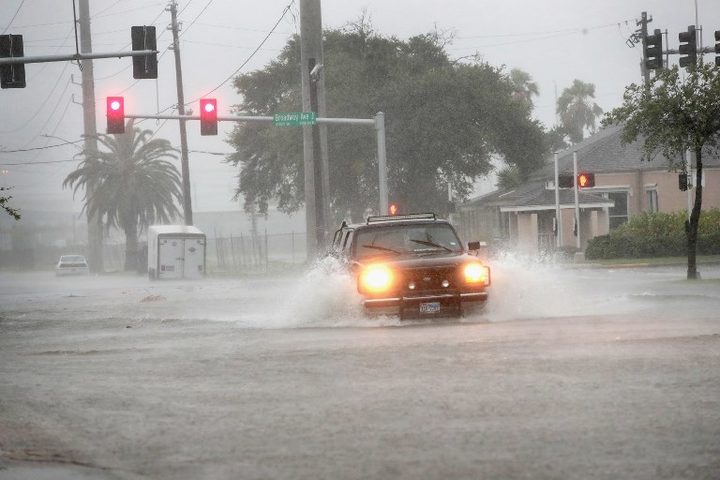 A vehicle navigates a street flooded by rain from Hurricane Harvey. Photo: AFP

Forecasts say that up to 1 metre of rain could fall in some areas of the middle and upper Texas coast, the hurricane center (NHC) warned. Such precipitation could trigger flooding in low-lying areas and near water outlets and rivers.

The National Weather Service cautioned that the storm was so severe that many areas could be uninhabitable for months.

The storm has now mostly moved inland, officials say, with several places already reported to have received well over 25cm of rain.

But coastal areas will also be flooded by storm surges during high tide, the NHC said.

Meteorologist Wendy Wong told the Houston Chronicle that at least seven tornadoes which stemmed from the hurricane had struck the Houston area between Friday evening and Saturday afternoon.

The tornadoes destroyed buildings and homes and are likely to continue throughout Sunday and Monday.

Earlier, Harvey made a double landfall: north-east of the city of Corpus Christi initially late on Friday local time, then just north of Rockport a few hours later.

When the storm struck close to Corpus Christi it had winds of up to 215km/h, but by 18:00 GMT its sustained winds had dropped to 112km/h - therefore becoming a tropical storm.

It was moving at an extremely low speed - 3km/h.

The port of Corpus Christi - which closed on Thursday in preparation for the storm - only received "minor damage". Its navigation channel is due to reopen after a survey is completed by engineers.

Texas City also expects to open its port within 48 hours.

Utility companies say nearly 300,000 customers have been without electricity.

President Donald Trump has freed up federal aid for the worst-affected areas and Governor Abbott praised the administration for "stepping up".

In a teleconference with cabinet members Mr Trump "emphasised his expectations that all departments and agencies stay fully engaged and positioned to support his number one priority of saving lives", the White House said.

At least 18 people have been rescued from vessels in distress by Coast Guard helicopters. ABC News has tweeted a video of four people being rescued off the coast of Port Aransas.

Rockport, normally home to about 10,000 people, appears to have been the hardest hit town.

Travis Pettis, a reporter with the Caller Times newspaper in Corpus Christi, told the BBC that strong winds when the storm arrived made the rain feel like "needles".

Trees came down in the city and power supplies were cut, but thousands of residents had heeded warnings and boarded up their homes before fleeing.

A New Zealander living in Houston told RNZ residents were battling life-threatening flooding, high winds, and significant damage to buildings in the wake of Hurricane Harvey.

Jordan Gamage said they were experiencing heavy rain in Houston, and further south along the coast things were much tougher.

"I have two friends down near Rockport, they stayed a little too late but got out just before things got too bad.

"But a lot of water on the coast, if your house isn't on stilts you know pretty much it's going to be flooded out, a lot of wind damage, a lot of roofs torn off, buildings collapsed inwards."

A New Zealand citizen who is part of search and rescue efforts in Texas said their biggest concern was people not evacuating their homes.

She said the most dangerous element of the storm was people who didn't listen to mandatory evacuation announcements and stayed behind with their animals.

"We end up having an issue with pets as well, dogs and cats, and at this point, we will not be taking them in. It'll just be people, so that's going to be a big concern ... loss of wildlife, possibly loss of pets for these families ... and then of course, putting ourselves in danger as first responders, having to go out into these floodwaters and getting people from their homes that chose to stay behind."

Port Aransas, a city on Mustang Island, near Corpus Christi, is also reported to have extensive damage. Local media reports say a search and rescue operation is under way at a trailer park.

Harvey is the first major storm of the Atlantic hurricane season. It is forecast to meander across south-east Texas until Wednesday.

The storm is the strongest to hit the US since Charley in August 2004 and the most powerful to hit Texas since Hurricane Carla in 1961, which killed 34 people, according to the Houston Chronicle.