What is expected to be the worst storm to hit the United States mainland since Hurricane Katrina 12 years ago, is forecast to make landfall in Texas this afternoon. 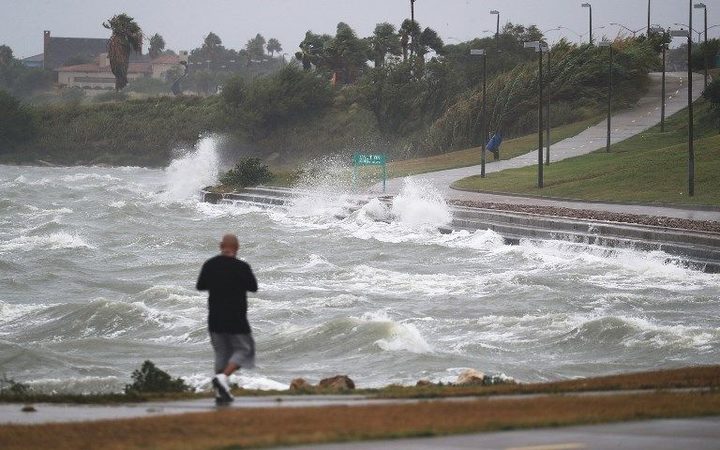 Sal Valerio walks near the bay waters as they churn from approaching Hurricane Harvey. Photo: AFP

Hurricane Harvey has been passing over the Gulf of Mexico, and officials have warned that its torrential rains and storm surges could bring life-threatening floods to Houston and surrounding areas.

Tens of thousands of people have already been evacuated from its path.

Harvey - which has been gaining strength - is likely to strike at the heart of Texas's oil refining industry.

Oil-rich Houston, the fourth biggest city in the US, could face up to 20in of rain over the coming days, officials there said.

Meteorologists are warning of extremely high volumes of rainfall as the storm stalls over the middle Texas coast.

They say Harvey could remain in the area, dumping rain until the middle of next week.

On top of that, the central Texas coast is likely to see a significant storm surge - this happens when low pressure at sea "lifts" tides to a level higher than normal, up to 12ft in this case, and high winds then blow the water in land.

The National Hurricane Center said it expected "catastrophic flooding" across the coast and in some inland areas throughout south-east Texas.

Energy companies have been evacuating staff from offshore platforms in the Gulf of Mexico.

Texan oil refineries on land are also shutting down in preparation for the storm. As a result, US fuel prices have reached a three-week high.

"I hope people will listen to forecasters when they say 'beware of flash floods'," he said. "Flash floods can come quickly, and they can be deadly."