At least seven people in the Houston area are dead due to Tropical Storm Harvey, but officials warn the worst flooding is still to come with more heavy rain on the way. 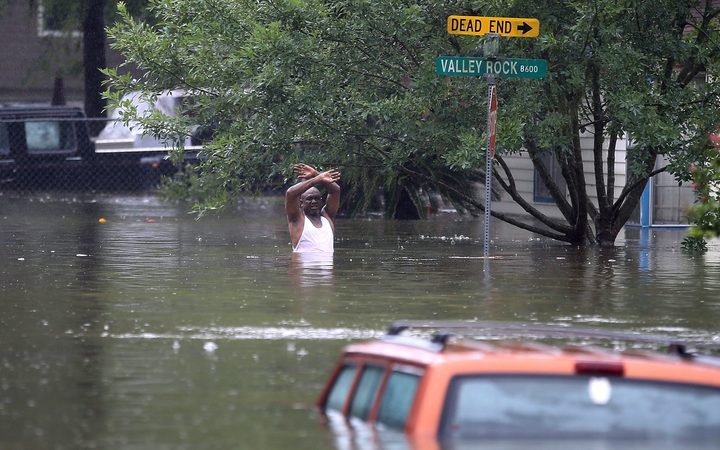 A man waves down a rescue crew as he tries to leave an area of Houston that has been swamped by floodwaters. Photo: AFP

About 30,000 residents of the United States' fourth-largest city were expected to be left temporarily homeless by Harvey, which became the most powerful hurricane to strike Texas in more than 50 years when it came ashore on Friday near Corpus Christi, about 354km south of Houston.

National Guard troops, police officers, rescue workers and civilians raced in helicopters, boats and special high-water trucks to rescue the hundreds of people still stranded in and around Houston, the nation's fourth-largest city.

The Governor of Texas authorised the deployment of all 12,000 members of the National Guard.

US President Donald Trump plans to go to Texas on Tuesday to survey the damage and may in the future visit Louisiana where the storm is now dumping rain.

Mr Trump, facing the biggest US natural disaster since he took office in January, has signed disaster proclamations for Texas and Louisiana, triggering federal relief efforts. 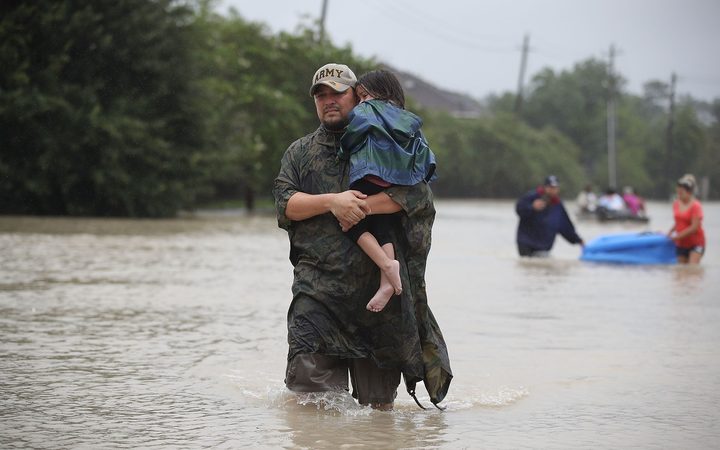 Thousands of people have been forced to use emergency shelters after fleeing their flooded homes. Photo: AFP

Harvey has killed at least six people in Harris County, where Houston is located, said Tricia Bentley, a spokeswoman for the county coroner's office. The deaths included a man who died in a house fire on Friday night and an elderly woman driving through flooded streets on the city's west side the next day.

A 60-year-old woman died in neighbouring Montgomery County when a tree fell on her trailer home while she slept, the local medical examiner said on Twitter. With other people missing, the death toll could rise.

Both of Houston's major airports were shut down, along with most major highways, rail lines and a hospital, where patients were evacuated over the weekend. As of Monday evening 267,000 Texans were left without power in the southeast corner of the state.

The Harris County Office of Homeland Security and Emergency Management issued a "shelter in place" warning to residents of La Porte and Shoreacres, about 40km east of Houston, after a chemical leak was caused by a ruptured pipeline.

As stunned families surveyed the wreckage of destroyed homes and roads flooded or clogged with debris, Texas Governor Greg Abbott warned Houstonians to brace for a long recovery.

"We need to recognize this is going to be a new and different normal for this entire region," Abbott said. 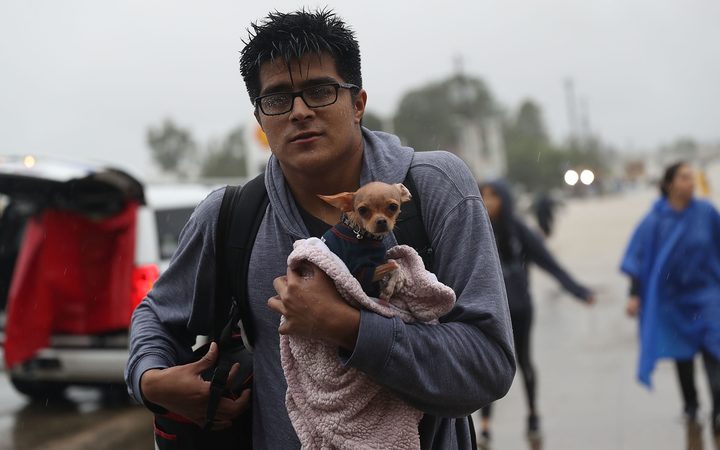 Evacuees - and their dogs - make their way to dry land after leaving their flooded homes. Photo: AFP

Harvey was expected to linger over Texas' Gulf Coast for the next few days, dropping another 25cm to 51cm of rain, with threats of flooding extending into Louisiana.

Schools and office buildings were closed throughout the metropolitan area, home to 6.8 million people, as chest-high water filled some neighborhoods in the low-lying city.

Federal engineers would need to release water from the reservoirs to keep it from jumping dams and surging uncontrollably into the homes they protected, officials said.

The US Army Corps of Engineers said it was releasing water from the nearby Addicks and Barker reservoirs into Buffalo Bayou, the primary body of water running through Houston.

"The more they release it could go up and it could create even additional problems," Houston Mayor Sylvester Turner warned. But the release was said to be necessary to prevent an uncontrolled surge of water, which Turner said "would be exponentially worse." 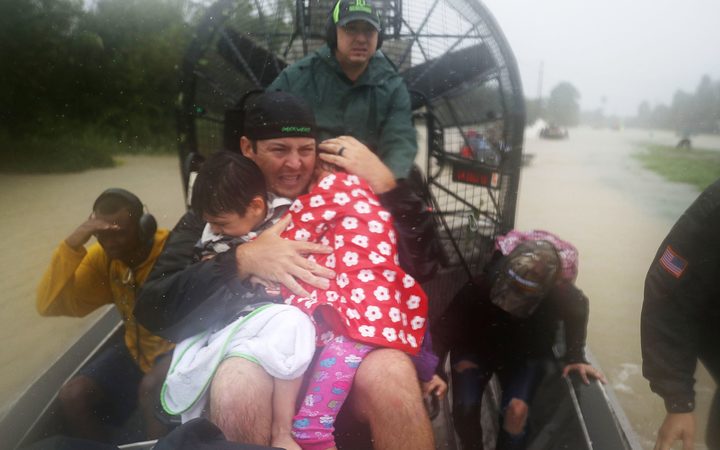 Dean Mize holds children as he and Jason Legnon use an airboat to rescue people from inundated homes. Photo: AFP

In scenes evoking the aftermath of Hurricane Katrina in New Orleans in 2005, police and Coast Guard teams have rescued 2000 people so far, plucking many from rooftops by helicopter, as they urged the hundreds believed to be marooned in flooded houses to hang towels or sheets outside to alert rescuers.

Mr Abbott activated all 12,000 members of the state's National Guard, who joined local police in the effort to rescue people before waters rose again, with up to 64cm of rain expected in the coming days.

Harvey's centre was 148km southwest of Houston on Monday morning and forecast to arc slowly towards the city through Wednesday, with the worst floods expected later that day and on Thursday.

Schools, airports and office buildings were closed throughout the metropolitan area, home to 6.8 million people, on Monday as chest-high water filled some neighbourhoods in the low-lying city. 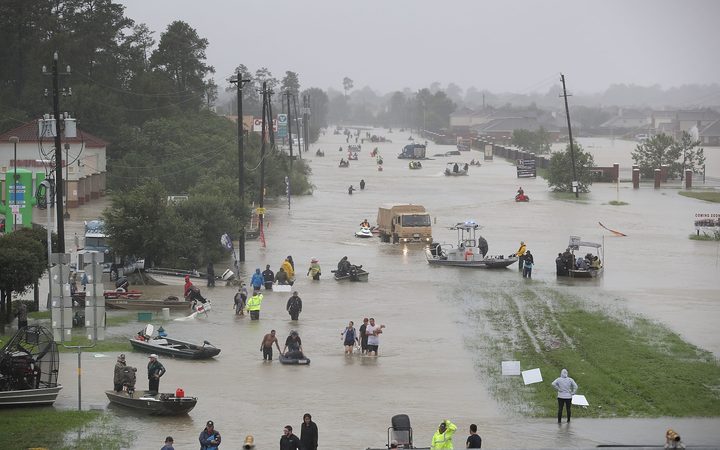 The US Army Corps of Engineers said Monday that it was releasing water from the nearby Addicks and Barker reservoirs into Buffalo Bayou, the primary body of water running through Houston. Officials warned that would lead to more flooding.

"The water in the Buffalo Bayou is not going to be going down soon ... the more they release, it could go up and it could create even additional problems," Mr Turner warned. The release was necessary to prevent an uncontrolled surge of water, which Mr Turner said "would be exponentially worse".

Torrential rain also hit areas more than 240km away, swelling rivers upstream and causing a surge that was heading toward the Houston area, where numerous rivers and streams already have been breached. Some areas have already seen close to 1m of rain, according to the National Weather Service.

By the end of the week in some Texas coastal areas, the total precipitation could reach 127cm - which is the average rainfall for an entire year - forecasters said.

About 5500 people were in shelters as of Monday morning, city officials said, with Federal Emergency Management Agency Administrator Brock Long forecasting that more than 30,000 people would eventually be placed temporarily in shelters.

Many area residents were left in limbo, wondering what remained of their flooded homes.

Their number included Kristina Pederson, 25, who was stocking up on food for the 10 dogs that were staying with her, her grandmother and sister after the family abandoned its farm and 20 head of cattle outside the city.

"We left them there and hoped for the best. They have 500 acres [200ha] and some high ground so we're hoping they are OK," said Ms Pederson, who added that she had no regrets for fleeing her property.

"Lives are more important than houses. Houses can be rebuilt." 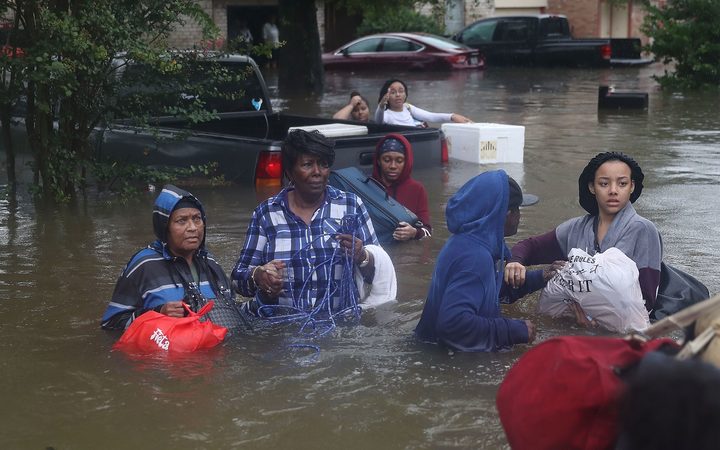 Families were forced to leave everything behind as wide-ranging evacuation orders were given. Photo: AFP

Authorities ordered more than 50,000 people to leave parts of Fort Bend County, southwest of Houston, as the Brazos River was set to crest at a record high of 18m this week.

Houston did not order an evacuation due to concerns about people being stranded on city highways now consumed by floods, Mr Turner said.

Mr Long on Monday did not question the decision, saying the "evacuation of the city of Houston could take days, days, literally days".

Mr Abbott, who had suggested on Friday that people leave the area, on Monday told CBS This Morning that "the time for making that determination has passed, and [there's] no need to for us to relitigate that issue right now." 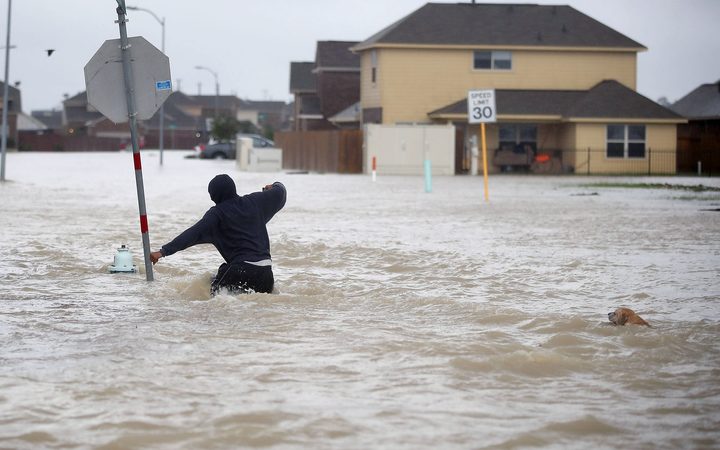 A man and his dog wade to safety through the floodwaters. Photo: AFP