Explosions at a chemical plant near Houston are posing a fresh worry for storm-battered Texas while rescuers searched block by block for survivors of Hurricane Harvey and the death toll rises as high as 39 people. 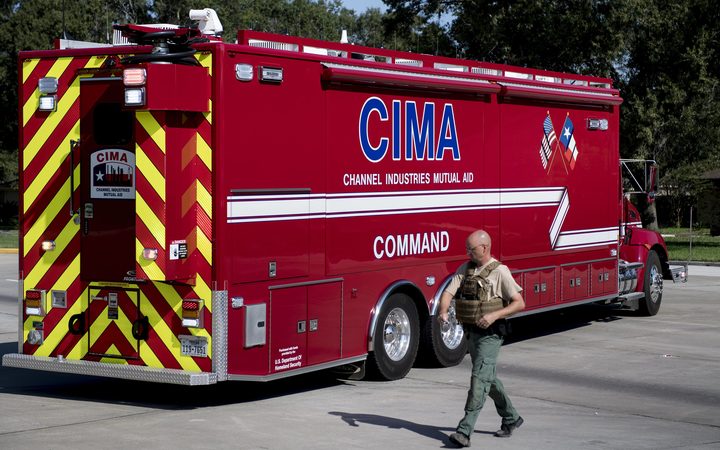 Emergency services can be seen near the Arkema Group chemical plant in Crosby, Texas on Thursday. Officials said more explosions were expected, but there was no danger to the public outside the safety cordon. Photo: AFP

The explosions in Crosby, Texas, were the latest consequence of the historic flooding brought by the most powerful storm to land in the US state in a half-century, which drove tens of thousands from their homes.

The number of people killed by the storm remains unclear, with international media reporting at least 33 dead and as many as 39 reported deaths related to the storm.

Portions of the state's southeastern coast, including Beaumont and Port Arthur, remained severely flooded, even as some commuters began returning to the streets of parts of Houston. In Beaumont, a hospital was evacuated after losing its water service.

In Crosby, about 48km northeast of Houston, about 15 sheriff's deputies were taken to a hospital after being exposed to a 12m-high smoke plume. The smoke erupted when chemicals stored at an Arkema SA plant burst into flames after the refrigerator cooling the truck trailer they were stored in failed.

After the multiple blasts on Thursday, local public safety and company officials insisted there was no risk to the public outside the 2.4km safety perimeter, even though they said eight more trucks storing the same chemicals would eventually catch fire.

"They are going to burn with intensity," said Bob Royall, assistant chief of emergency operations at the Harris County Fire Marshall's Office. "Most of the material is going to be consumed by a very hot fire."

That was no comfort to Frances Breaux as she pleaded with police at the perimeter to check on an elderly married couple who live two streets from the plant. The couple, Leo and LeJane Opelia, both in their late 70s, were evacuated from their home but returned Wednesday night to check on their cats and belongings, Breaux said.

"I keep trying to call them and I can't reach them," Breaux said through tears. "I just want to make sure that they are OK."

Police said the risk of more blasts made it too dangerous to check on the couple.

An Arkema company official described the smoke as a noxious irritant created after refrigeration systems on a truck used to store the chemicals failed, causing them to overheat.

The US Environmental Protection Agency said in a statement that the amount of toxic materials released appeared to be too small to present a public health concern.

By Thursday, Harvey had been downgraded to a tropical depression, located about 24km south of Monroe, Louisiana. But there was potential for further flooding in the brimming rivers and reservoirs it left behind in Texas.

The Coast Guard was moving rescue workers and equipment from Houston into the Port Arthur and Beaumont areas as calls for help there continued to come in, a spokesman said.

Nine members of the ad-hoc "Cajun Navy" - volunteers towing boats behind pickup trucks - gathered in Lake Charles early on Thursday, deliberating whether they could safely get in to badly flooded parts of coastal southeastern Texas, including Orange, Port Arthur and Beaumont.

"You can't get anywhere by vehicle," said Troy Payne, 56, who had driven from Atlanta. "To me, this is a helicopter function from here on out unless the water level falls."

Beaumont said it had lost its water supply due to flood damage to its main pumping station. That led to the evacuation of Baptist Beaumont Hospital, where patients were led and carried to military helicopters.

"We don't have any water. Water shut down. We can't run (kidney) dialysis," and other procedures, said hospital security guard Devan Campbell, standing outside as about 190 patients were led out.

Fort Bend County ordered a mandatory evacuation on Thursday for areas near the Barker Reservoir, which was threatening to flood. The reservoir is about 32km west of Houston.

Some signs of normal life returned to Houston, the nation's fourth most populous city. Businesses began to reopen downtown, commuters returned to roadways, and shelter residents headed out to check on their flooded homes.

That proved a heartbreaking experience for some.

'Not my house anymore'

Anita Williams, 52, was among dozens of people lined up Thursday morning at a shelter at Houston's George R Brown Convention Center to register for aid from the Federal Emergency Management. She said she had returned to her neighbourhood on Wednesday to survey the damage to her one-storey house.

"It's not my house anymore. My deep freezer was in my living room," she said, her voice breaking.

The storm prompted the US Energy Department to authorize the first emergency release of crude oil from the Strategic Petroleum Reserve since 2012, as global fuel prices spiked higher.

Moody's Analytics estimated the economic cost from Harvey for southeast Texas at $US51 billion to $US75bn, ranking it among the costliest storms in US history.

The storm has drawn comparisons to 2005's Hurricane Katrina, which killed more than 1800 people in New Orleans, and 2012's Superstorm Sandy, which killed 132 around New York and New Jersey.

US Vice President Mike Pence and several Cabinet secretaries arrived in Corpus Christi to meet residents affected by the storm.