Hurricane Harvey has forced 779,000 Texans to evacuate their homes, while another 980,000 have fled voluntarily, with swollen reservoirs and rivers bringing new flooding. 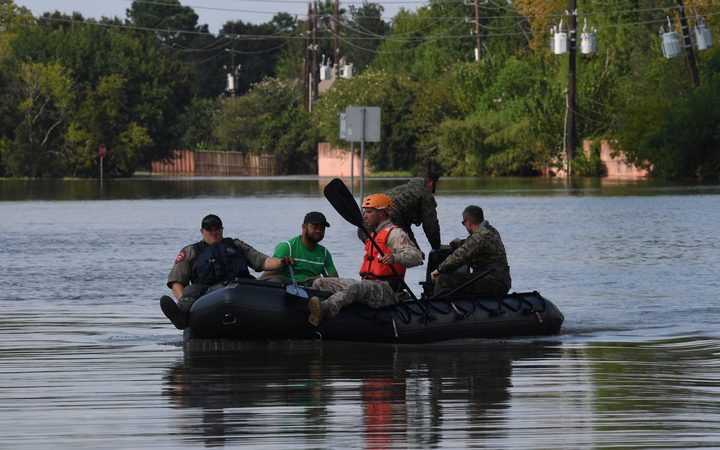 Military and state troopers help evacuate a man beside the spillway of the Barker Reservoir in the Coldine area. Photo: AFP

Soldiers and police in helicopters and high-water trucks have continued to rescue thousands of Texans stranded by floodwater from Harvey, with the death toll rising as the storm drenches the Gulf Coast.

At least 38 people were dead or feared dead in six counties around Houston, according to local officials.

Harvey roared ashore late Friday as the most powerful hurricane to hit Texas in a half-century. It has since been downgraded to a tropical depression as it heads inland, leaving devastation across the southeast corner of the state.

Jessica Richard, 24, said she waited out the storm in her home in Port Arthur, about 137km east of Houston, until Thursday morning when water on her street rose to waist-depth. She was picked up by a passing truck.

"All my family is safe even though there were a few close calls," said Ms Richard, adding that her nephew had been trapped overnight in a flooded apartment with several family members. "He said there were snakes in the water and spiders crawling up the walls. But they got out." 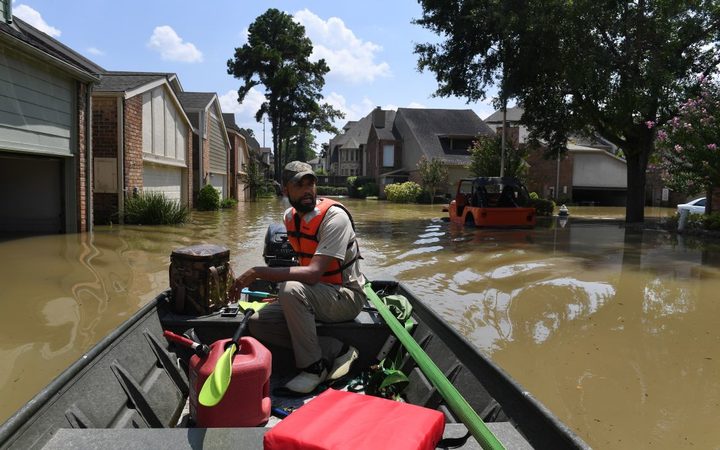 Volunteer rescuer Matt Clarke searches for local residents after a mandatory evacuation was ordered in the area beneath the Barker Reservoir. Photo: AFP

In Houston, the nation's fourth most populous city, which was paralysed by the storm earlier in the week, firefighters conducted a block-by-block search of homes to rescue stranded survivors and recover bodies.

In Beaumont, Texas, about 130km east of Houston, doctors and nurses evacuated some 190 people from a hospital that halted operations after the storm knocked out water service in the city of almost 120,000 people.

Orange County, which borders Beaumont, today ordered remaining residents to evacuate the area amid a forecast that the Neches River would crest tomorrow, threatening homes.

Just east of Rose City, Texas, a line of cars and trucks were pushing through water flowing over the Interstate highway.

A convoy of civilian volunteers from the ad-hoc "Cajun Navy," who have been carrying out rescues all week, waited as their leader, Phil Drager, negotiated with police to stop traffic and launch an airboat for a scouting mission.

"Now I can add shutting a major Interstate highway to my resume," Drager said.

"The American people are with you. We are here today, we will be here tomorrow and we will be here every day until this city and this state and this region rebuild bigger and better than ever before," Mr Pence told a crowd outside a Rockport church damaged by the storm. 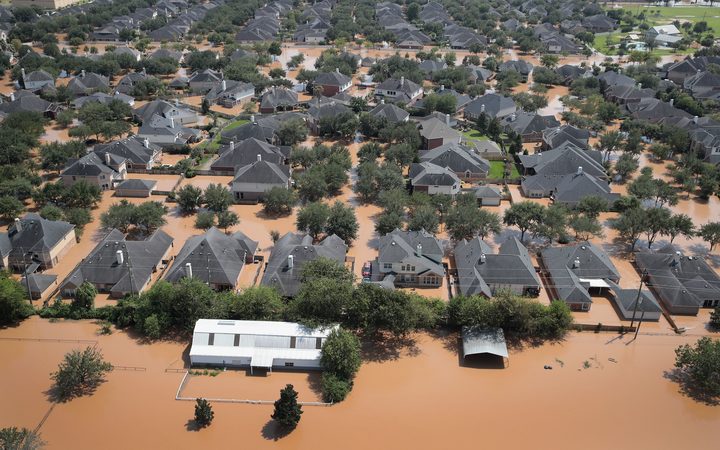 The White House will ask Congress for emergency funding to help those affected by Hurricane Harvey, with Donald Trump pledging $US1 million of his own money.

The president is expected to propose an initial $US5.9 billion in aid, AP reports.

Mr Pence said 311,000 people had registered for disaster assistance, and that he hoped for bipartisan support in Congress for the funding request.

It is not yet clear how quickly funds might reach victims.

Gasoline futures soared more than 13 percent on Thursday, as almost a quarter of US refining capacity had been knocked offline by the storm, raising fears of fuel shortages.

About 189,000 homes and businesses remained without power.

Moody's Analytics estimated the economic cost from Harvey for southeastern Texas at $US51bn to $US75bn, ranking it among the costliest storms in American history.

The event has drawn comparisons to 2005's Hurricane Katrina, which killed more than 1800 people in New Orleans. Then-president George W Bush's administration was widely criticised for the haphazard initial response to that storm, and the Trump administration was taking care to be seen as responding quickly to the first major natural disaster it has faced.

Mr Trump was to return to the region on Saturday.

Early Thursday, explosions could be heard at a chemical plant in Crosby, Texas, owned by Arkema SA. Refrigeration systems failed in a truck storing volatile chemicals, which ignited as they warmed, sending smoke plumes 12m into the air, according to company and public safety officials.

After the blasts, local and federal public safety officials, and company representatives insisted there was no risk to the public outside the 2.4km safety perimeter, even though they said eight more trucks storing the same chemicals would eventually catch fire.

Some signs of normal life have returned to Houston.

Residents began a massive cleanup, dragging water-logged furniture to the curb, hunting for supplies and repair estimates. The city began limited trash pickup and bus services. Hospitals that had struggled to stay open earlier in the week were phasing in clinical operations. 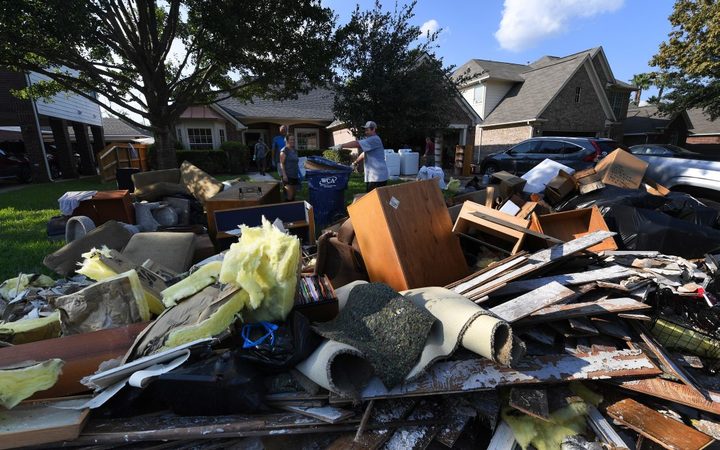 Members of the Olson family remove debris and damaged items from their father's home in the Twin Oaks Estate. Photo: AFP

Most of the city's larger companies said they would remain closed through the Labour Day holiday on Monday, but employees of smaller businesses and offices were trekking back to work.

Both of the city's major airports were operating on Thursday and traffic returned to its notoriously clogged highways. The start of public school was delayed until 11 September.

Anita Williams, 52, was lined up at a shelter at Houston's George R. Brown Convention Centre to register for aid from the Federal Emergency Management Agency. Ms Williams had returned home on Wednesday to survey the damage to her one-story house.

"It's not my house anymore," Ms Williams said. "My deep freezer was in my living room."