White House Press Secretary Sean Spicer has moved to minimise talk of divisions within the Trump administration after announcing his resignation. 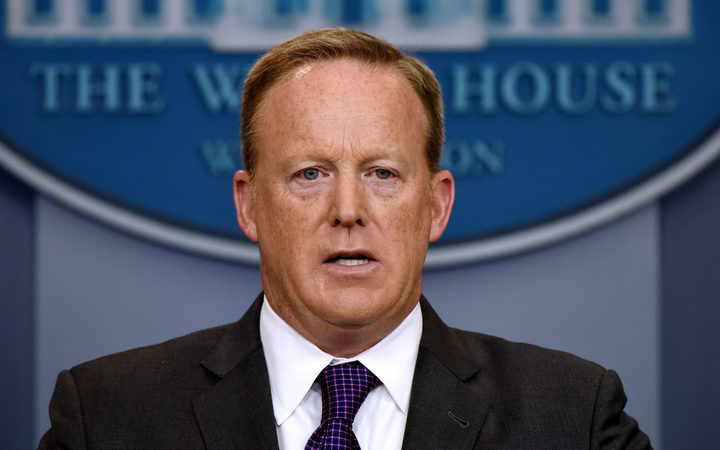 Mr Spicer is reportedly stepping down because he is unhappy with President Donald Trump's appointment of a new communications director.

But he told Fox News he had "no regrets" about his six-month stint.

Wall Street financier Anthony Scaramucci has been picked for the role that Mr Spicer had partially filled.

The shake-up at the White House comes amid several investigations into alleged Russian meddling in last year's US presidential election and whether Mr Trump's campaign team colluded with Moscow.

"The president obviously wanted to add to the team, more than anything," Mr Spicer told interviewer Sean Hannity.

"I just thought it was in the best interest of our communications department, of our press organisation, to not have too many cooks in the kitchen.

"Without me in the way, they have a fresh start, so that I'm not lurking over them."

He defended President Trump's agenda, saying it was an honour and a privilege to serve him, and hit out at what he termed "media bias".

He said: "I was increasingly disappointed about the way the media here do their job - or don't do their job."

The 45 year old also said he had told Mr Trump he "would stay on for a few weeks to achieve a smooth transition", and was looking forward to spending more time with his family.

President Trump tweeted: "Sean Spicer is a wonderful person who took tremendous abuse from the Fake News Media - but his future is bright!"

The New York Times reported that Mr Spicer had "vehemently" disagreed with the appointment of Mr Scaramucci, which he believed to be a "major mistake"

Mr Spicer's often chaotic press briefings over the past six months were a cable news hit, but in recent weeks he had withdrawn from appearances in front of the camera.

What does Scaramucci say?

"I love the president and it's an honour to be here," Mr Scaramucci said. "He is genuinely a wonderful human being."

"The president has really good karma."

Mr Scaramucci, who has no previous experience in communications roles, paid tribute to Mr Spicer as "a true American patriot" and "incredibly gracious".

"I hope he goes on to make a tremendous amount of money," he said.

Mr Scaramucci also apologised and said he had been "unexperienced" as he explained his previous criticism of the president.

In an August 2015 interview with Fox Business, he dismissed Mr Trump as a "hack" and "an inherited money dude" with "a big mouth".

A former member of the Trump transition team, Mr Scaramucci mistakenly suggested to the BBC in January that Elton John would play at the new president's inauguration. The singer promptly denied it.