In his storied life Senator McCain has survived a huge naval ship explosion, flying into power lines, crashing a fighter jet into a lake, five years in a Vietnamese POW camp, at least two run-ins with melanoma, and teaming up with Sarah Palin. 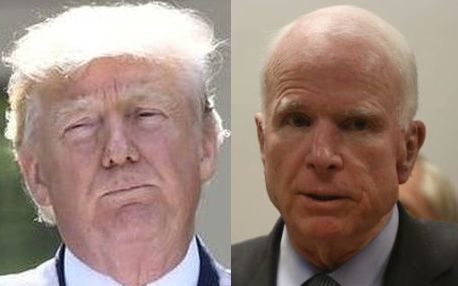 But his diagnosis with glioblastoma, the aggressive brain cancer that killed Ted Kennedy could be his last fight. The prognosis, even after successful surgery is far from rosy. Survival rates beyond a year for those aged over 55 are vanishingly small, and John is 80.

But he's John McCain so you can never tell. And unlike many Americans he has a fantastic health care plan, because he's a congressman. And with a fabulously wealthy spouse, presumably no expense will be spared in his care.

John McCain is an American hero & one of the bravest fighters I've ever known. Cancer doesn't know what it's up against. Give it hell, John.

Weirdly, the diagnosis is also good news for Obama. The absence of McCain from the senate has reduced the Republican majority to just two, making new health care legislation (or anything else controversial), all but impossible. The Republicans are too divided and too ill-led to achieve much with a simple majority.

If John McCain dies or resigns, Arizona's Governor, Doug Ducey, will appoint another Republican to replace him as senator until the 2018 election.

This is also bad news for the Republicans. It would mean both Arizona senators were up for election next year - and both Republican held seats could easily go Democratic in a state where Donald Trump only narrowly beat Hillary Clinton.

But in the shorter term this brain cancer diagnosis raises another, more disturbing issue.

Senator McCain confused everyone, including James Comey. Among other things, he seemed to suggest that the FBI should be investigating Hilary Clinton for colluding with Russia to help ensure she lose the election. McCain later apologised for his performance, blaming a late night watching football.

You have to wonder whether his personal physician decided at that point that some cognitive tests were in order. Just a month later, after an operation on a blood clot above his eye, cancer has been confirmed.

The cognitive impacts of a glioblastoma include changes in personality, speech difficulties, and 'changes in ability to think and learn'.

Yes, John McCain's questions were odd, but they were still coherent. Which brings us to the other half of this problem - Donald Trump.

This week, President Donald Trump sat down for an interview with the New York Times - that newspaper he hates so much and yet still craves attention from.

Headlines from the encounter are focussed on Trump's unusual attack on his own Attorney General, Jefferson Beauregard Sessions III, for recusing himself from the FBI's Trump-Russia investigation.

But the transcript reveals a wider nightmare; repeated bizarreness, jumbled thoughts, even incoherent speech. His descriptions of World War II would not seem out of place on Drunk History. It's not a new problem. Aspects of the Donald's many recent interviews or speeches are troubling.

To be blunt, John McCain has brain cancer and still makes much more sense than President Trump.

This cancer is known to wreck cognitive havoc, but McCain is still more coherent, more reasonable, and less volatile than the president.

The possibility has been discussed before, but John McCain's sad diagnosis brings it into sharp focus for me.

In the McCain case, troubling speech was indicative of an awful, organic disease. In the Trump case we can only guess, and hope the global impacts are not too severe.

Earlier this year Stat News reported that a linguistic analysis of Donald Trump's many media appearances through the decades show a sharp decline in his cognitive capacity.

One analysis has suggested he now speaks at a sixth grade level (age 11), though most 11-years-olds might disagree with that.

The analysis is helped by the sheer number of interviews he has given over the years, in a career that has leveraged notoriety into brand value.

There is plenty of material to choose from. Have a look at some videos yourself. Here is Donald Trump in 1987 chatting with David Letterman. "Most people love me, and a few people have great distaste for me David."

And this is Donald Trump in May 2017, answering a question about the Russia investigation. "Well, I respect the move, but the entire thing has been a witch hunt. There is no collusion between certainly myself and my campaign. But I can always speak for myself, and the Russians. Zero."

And then, to really scare yourself, compare that answer with Ronald Reagan answering a question in 1987, towards the end of his presidency, when there was already real concern about his cognitive capacity as he struggled with the onset of what turned out to be dementia.

But he is still significantly more coherent than the current 'leader of the free world'.