Veteran US Republican Senator John McCain has been diagnosed with brain cancer and is reviewing treatment options, according to his office. 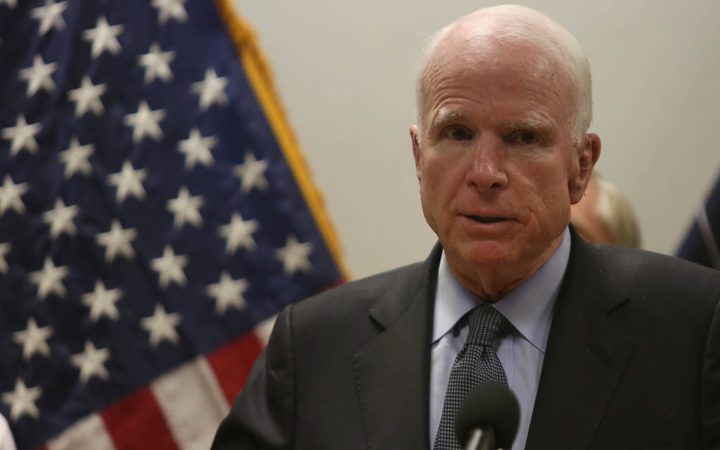 Senator McCain is recovering from a surgery that removed a blood clot from above his left eye. Photo: AFP

The options may include chemotherapy and radiation, his doctors said. The 80-year-old politician is in "good spirits" recovering at home.

The tumour was discovered during a surgery to remove a blood clot from above his left eye last week.

A Vietnam veteran, Mr McCain spent more than five years as a prisoner of war.

The six-term senator and 2008 Republican presidential candidate underwent surgery at a clinic in Phoenix, in the state of Arizona, last Friday.

Tissue analysis revealed that a primary brain tumour known as a glioblastoma was associated with the clot, a statement from the Mayo Clinic said.

The senator's doctors say he is recovering from his surgery "amazingly well" and his underlying health is excellent.

"Treatment options may include a combination of chemotherapy and radiation."

Glioblastoma is a particularly aggressive brain tumour, and increases in frequency with age, affecting more men than women.

Mr McCain, who is the chairman of the Senate Committee on Armed Services, was in "good spirits as he continues to recover at home with his family", his office said.

His family reacted with "shock" to the news, his 32-year-old daughter Meghan said.

"It won't surprise you to learn that in all of this, the one of us who is most confident and calm is my father," she said on Twitter.

"So he is meeting this challenge as he has every other. Cancer may afflict him in many ways: but it will not make him surrender. Nothing ever has."

President Donald Trump said Mr McCain has "always been a fighter" and, in a statement, said: "Get well soon".

"He has never shied from a fight, and I know that he will face this challenge with the same extraordinary courage that has characterized his life," he said on Twitter.