US President Donald Trump met Russian counterpart, Vladimir Putin at a second, previously undisclosed meeting at this month's G20, it has emerged.

They held talks after a formal sit down but the White House has not revealed details of what they discussed. 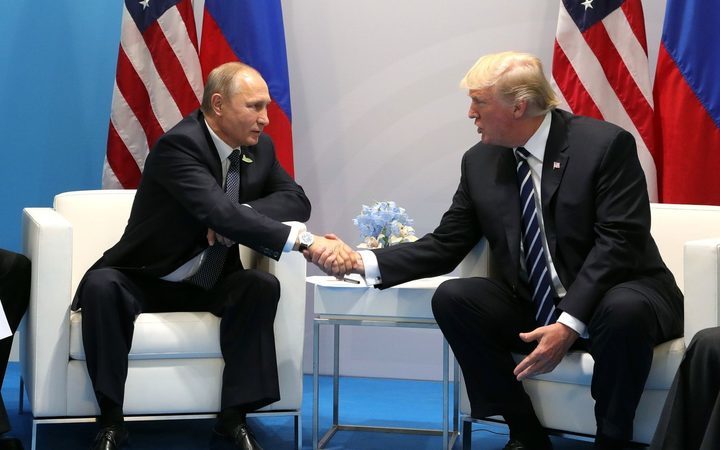 The two leader's relationship is under intense scrutiny amid allegations of collusion between Russia and the Trump campaign.

The second meeting happened during a private meal of heads of state at the G20 summit in Hamburg earlier in the month.

The US president was alone, and Mr Putin was attended only by his official interpreter, with US media saying it lasted an hour.

The only version of what was discussed was provided to White House officials by Mr Trump himself, as there were no other US aides present at the conversation.

The White House confirmation came after media reports revealed the encounter. An official described the interaction as a "brief conversation", not a "second meeting".

A Russian translator was used, the official added, because the US translator at the dinner did not speak Russian.

The talks were first reported by Ian Bremmer, president of the US-based Eurasia Group, in a newsletter to clients. He described that both talked "privately and animatedly" and that the lack of a US translator had raised eyebrows at the dinner.

The White House official added that the "insinuation" that the government had "tried to 'hide' a second meeting is false, malicious and absurd".

Mr Trump later said on Twitter: "Fake News story of secret dinner with Putin is 'sick.' All G20 leaders, and spouses, were invited by the Chancellor of Germany. Press knew!"

The Fake News is becoming more and more dishonest! Even a dinner arranged for top 20 leaders in Germany is made to look sinister!

At the formal meeting, their first face-to-face encounter, Mr Trump said he repeatedly pressed Mr Putin about the allegations of interference in the US vote.

Meanwhile, the White House said Mr Trump would nominate former Utah governor Jon Huntsman as ambassador to Russia, a key post for a president who promised to improve relations with Moscow.

Mr Huntsman, who served as ambassador to China and Singapore, needs to have his name confirmed by the Senate.

The suspicions over Russian interference in the election are likely to play a significant factor in his confirmation process, correspondents say.