New South Wales residents forced to flee their homes due to floodwaters caused by ex-Cyclone Debbie have been warned it is still not safe to return home, with hundreds of rescues already. 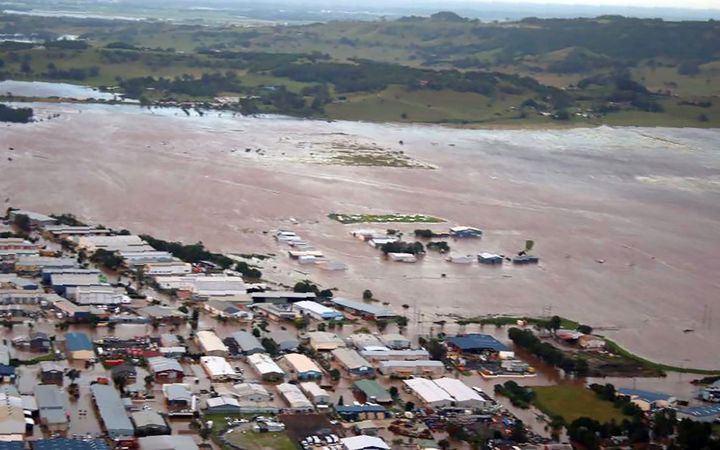 An aerial view of the flooding in the northern New South Wales town of Lismore after the area was hit by Cyclone Debbie. Photo: AFP

Days after evacuation orders were issued for thousands of residents in the state's north and south-east Queensland in the wake of Cyclone Debbie, many people are still unable to return home.

There have been two flood-related deaths in NSW: one near Murwillumbah - which was one of the worst-hit towns - and another in the Hunter region.

The Pacific Highway - the major road link between Queensland and NSW - has been cut off by water at Chinderah, although heavy vehicles were now being allowed through.

The Bureau of Meteorology said floodwaters travelling from Lismore were expected to peak at Woodburn this afternoon.

'Not safe to return'

Ms Berejiklian said she was "anxious" to get to flood-affected areas in the state's north.

But she urged residents not to return, and thanked families and friends who had been hosting locals who could not return home.

"It's not safe to ask anybody to return to their homes," Ms Berejiklian said.

The Premier asked for people to heed safety warnings from the SES.

"They're there to protect life, and everybody: if you think something looks safe, you cannot underestimate what's going on below the surface," she said.

NSW SES Commissioner Mark Smethurst said they had been "flat out" with more than 400 rescues in the flood-affected areas.

"Most of those flood rescues were from people trapped in their own buildings who did not heed the warnings when they were told to evacuate," he said.

"It's been a real problem up here, and certainly a concern to all the emergency services that have been working together."

Mr Smethurst urged people in the community to be patient and keep out of evacuated areas until the SES gave the all-clear.

"Please - don't get in the way of what other people are doing," he said.

Extra resources are now arriving in the area as the SES, which has hundreds of outstanding jobs, tries to get to residents in the flood-ravaged region.

"We can't stop the cyclones or the floods coming. But we are planning for them and responding to them better than ever," he said.

Between 500 and 740 millimetres of rain was recorded in NSW's Tweed River valley in the 24 hours to 2:00am yesterday, after which it began to ease.

Residents in Lismore said the water had receded by up to a metre in some parts of the city.

As the focus turned to cleaning up, some people who remained in their homes started to come out and assess damage.

However, authorities said it could be up to two days until the residents who fled their homes would be able to return.

"There's a lot of mud around and frankly we're better off to allow the levels to drop down to a safer amount before we get the professionals in there to start helping them."

Yesterday, 20,000 people in northern NSW were ordered to evacuate, while power was cut to 10,000 properties.

John Muntz causeway suffered major damage from the #bigwet! It will be closed for some time with detours in place, https://t.co/bytabM2Puf pic.twitter.com/6bcozkU8f9

A woman was reported missing at Burringbar, south of Murwillumbah in NSW, overnight on Thursday and police said a body was found on a flood-affected property about 8am on Friday.

The body of a second woman was found in a river in the Hunter Valley yesterday morning after her car was swept off a flooded bridge on Thursday night.

Police divers found the body of the 64-year-old woman trapped in her car in a river outside the town of Gungal, about 600 kilometres south of where the main flood problem areas are.

The woman's 74-year-old husband, who was also in the car, managed to escape.

Sue Pritchard, from the NSW SES, warned residents in affected areas to stay away from the flood waters.

"The SES is urging people not to drive through floodwaters, not be tempted to go sight-see in these areas or to let their children play in those floodwaters," she said.

Residents in some low-lying parts of Logan, south of Brisbane, are again being asked to consider leaving their homes as the flood emergency continued.

Thousands of people fled some areas in Logan, Beaudesert and the northern Gold Coast on Friday as the Albert and Logan rivers rose and inundated homes and businesses.

Waterford residents are desperately trying to prepare their homes for flooding with the Logan River rising & coming dangerously close pic.twitter.com/dQxeafRnTp

The Albert River is continuing to go down now but yesterday, it reached its highest levels since the 1974 floods in Brisbane.

The Logan River reached more than 15 metres at Beaudesert yesterday and was continuing to rise downstream.

Authorities warned Queenslanders to take their safety seriously as it remained a potentially dangerous situation.

"There are people playing around thinking it's fun," he said.

"The size of this wall of water is quite significant and the undercurrent is quite remarkable, so please just stay right out of it - it's not a place to play."

Hundreds of homes will be flooded

"We're anticipating 323 properties right across the city that will have had some kind of flooding - 211 homes that will be inundated - but of course it's wait and see."

Councillor Smith said while peaks had been reached in some areas, water levels are expected to stay elevated for another 24 to 48 hours.

"We're just asking people to get to high ground and stay there and be with your family, go out to someone who you know or go to one of our evacuation centres," he said.

The community of Beenleigh at Logan has been badly affected by floodwaters, with homes and property damaged.

Many Beenleigh streets have been cut off by floodwater, houses have been flooded and streets are strewn with debris and mud.

Parks and reserves in the area are also under water and most of clean-up effort will have to wait for the water to recede.

Beenleigh resident Michael Loane was one of many locals who rushed to help lower-lying neighbours as the water rose.

"We went next door to Paul's house, who's been a friend of ours for years, and in his back shed the water was up to our knees. About half an hour, an hour later, it was just up to our chest - it was just amazing how quick it came, we've never seen it like that before," he said.

"We're a pretty close community here and our family has been here fore over 60 years and same as the people next door.

"Everyone helped everybody - by an hour we had his whole shed cleared ... within an hour the whole house was pretty much cleared - the TV, the fridge, everything on their footpath.

"It's just a really close community out here ... everyone pitches in. We're real old-school around here, we help everybody out."

Veronica Thomson had just moved info the Beenleigh area and said she was shocked by the amount of water on the streets.

"The water was actually backwashing the lids on the drains - [they] were starting to lift, so water was coming up out of there," she said.

"It just kept getting higher and higher."