A 1300km stretch of Australia's north-east coast is at dangerous risk of flooding in the wake of Cyclone Debbie, which has also left three people injured. 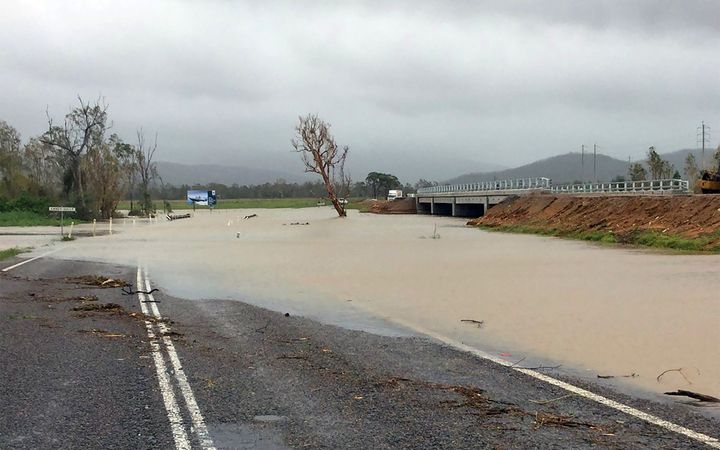 The ex-cyclone has caused major damage, torrential rain and power cuts to tens of thousands of homes, and Australian PM Malcolm Turnbull has activated a disaster response plan.

The deluge is set to hit Brisbane tomorrow.

The area is expected to get more than a month's worth of rain, before the low pressure system moves offshore on Friday.

The Bureau of Meteorology (BOM) said rivers from Ayr in north Queensland to the New South Wales border would experience some major flooding, however there would not be enough consistent rain to have a repeat of the 2011 Brisbane flood disaster.

The low pressure system is north-west of Moranbah, pounding the central Queensland coast with torrential rain.

Authorities have pleaded with people to stay off roads to avoid being stranded in floodwaters.

"We've already had two instances of people who were caught in a vehicle," said Queensland Fire and Emergency Services Commissioner Katarina Carroll, adding flood rescues were now her "biggest concern".

"There is flash flooding and we're expecting more of it," she said.

Her warning was reiterated by Mr Turnbull, who said nature had "flung her worst" at Queensland.

Cyclone Debbie made landfall between Bowen and Airlie Beach as a category four storm, whipping gusts of up to 263km/h, and has been moving further inland as a tropical low storm.

Queensland Premier Annastacia Palaszczuk said three people had been confirmed injured, but that number could rise.

"For many people this morning, they are waking up and they are seeing the devastation that has happened in their communities," Ms Palaszczuk told reporters.

She urged insurance companies to "treat people with respect" following the disaster, saying 63,000 homes were without power.

"Those areas and the Whitsunday Islands remain difficult for us to contact and to get into," he said.

The Australian Defence Force has been despatched in Queensland to begin public infrastructure repairs.

Electricity providers said it was not known when power would be restored to houses.

"There will be a lot of damage… particularly to the older buildings, older homes in particular," he said.

"Above all, the important message is to stay safe and follow the advice of the authorities."

More than 25,000 people were urged to evacuate their homes ahead of predictions the cyclone would be Queensland's most damaging since 2011.