Torrential rain and flash flooding are wreaking havoc across Queensland as the remnants of Cyclone Debbie move through the south-east and into New South Wales.

Residents in northern NSW have been ordered to evacuate as floodwaters threaten towns and properties. 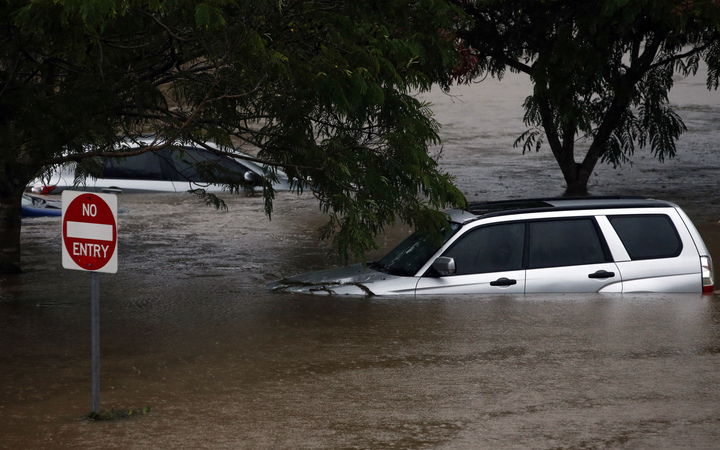 Residents of Lismore city and areas around Murwillumbah and Tweed Heads have been ordered to evacuate - affecting 40,000 people.

Lismore residents were ordered to leave immediately, after the weather bureau advised overnight rain would push Wilsons River to 11m by Friday morning.

"Do not delay your evacuation. Roads will be congested or closed. You could become trapped and need rescue," an official warning said.

Earlier this afternoon, residents within the South Murwillumbah, Codong and Tumbulgum areas were urged to leave as soon as it was safe to.

All schools in south-east Queensland have been closed due to flooding.

Although no longer a cyclone, the storm lashed Queensland's capital Brisbane with 200mm of rain in two hours on Thursday - more than its monthly average.

No injuries were reported, but authorities closed more than 1000 schools and urged people to stay home.

"We have not seen the worst of this weather system in the south-east," said Queensland Premier Annastacia Palaszczuk.

Every school in an almost 600km area stretching from Agnes Water to Coolangatta would remain closed until at least Monday, she said.

Queensland Police Commissioner Ian Stewart said the "unprecedented late call" was made after some children were already at school.

"We can't afford to have inexperienced young kids walking home from school at a time where there could be flash flooding," he said.

More than 1200 childcare centres were also closed, according to a government website.

Authorities pleaded with people to stay off roads and close shops, saying dozens of people had been rescued from floodwaters.

There had been about 40 rescues from fast-moving water in the south-east of the state, including a family of six, who were rescued as their home became inundated by rising floodwaters at Tanawha on the Sunshine Coast, the ABC reported.

Queensland Fire and Emergency Services Commissioner Katarina Carroll said it was "extraordinary" there had not been more injuries, criticising one person seen on a jet ski.

"What our worst fears are is that people do silly things like this, and this is when the tragedy will occur," she told Nine Network.

"Please keep your children away from drains [and] stay in your house." 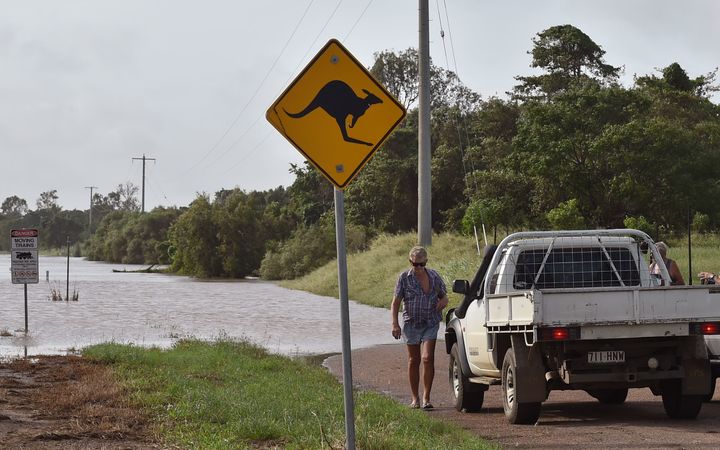 Flooding from the Burdekin River in Ayr in Queensland, which rose 10 metres, after the area was hit by ex-Cyclone Debbie. Photo: AFP

Australia's Bureau of Meteorology said parts of south-east Queensland could see up to 400mm of rain on Thursday.

"What we know is that we are anticipating the heavy falls in a short duration of time," senior forecaster Matthew Bass said.

The agency said the worst of the rain was still to come tonight, and would start clearing about midnight local time and into Friday morning. 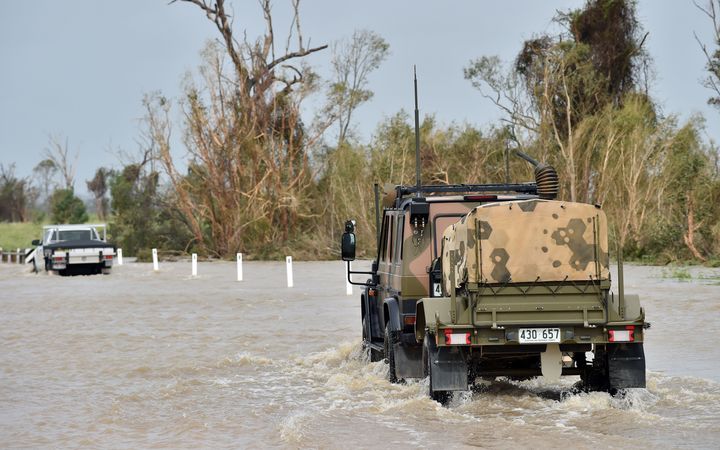 An army vehicle drives through floodwaters near the Queensland town of Bowen. Photo: AFP

"It is going to take some time to recover, and that's why we are here to show our support and commitment," he said from Bowen, a damaged town in northern Queensland.

Cyclone Debbie made landfall in north-east Queensland as a category four system on Tuesday.

Authorities said earlier today that 61,000 homes remained without power, and there was major damage to buildings, sugar cane and tomato crops.

The cyclone was also likely to have damaged the Great Barrier Reef, marine experts warned.