Boaty McBoatface has become the overwhelming choice in a public vote to name a UK polar research ship. 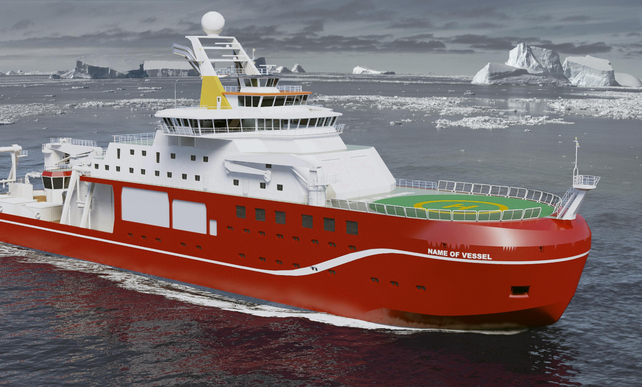 Thanks to everyone who took #BoatyMcBoatface in right spirit. Final say goes to @NERCscience, and there's plenty of worthy winners.

Boaty McBoatface was the runaway winner with 124,109 votes. The second most popular choice, Poppy-Mai, had 34,371.

Nerc said that according to its competition rules it would have the final say on any name.

The result of the poll has sparked a mixed reaction on social media.

One person commented: "If this boat isn't named Boaty McBoatface, then democracy has failed", while another said "this was funny, but bored now".

Meanwhile, another wrote on Facebook: "Not a name that will inspire confidence in its ability to provide credible research".

Thank you all for supporting our #NameOurShip campaign. The final decision will be announced in due course. pic.twitter.com/yg4VHvNrm5

At the height of the furore, Mr Hand tweeted an apology, but said that the storm his suggestion had created "had legs of its own".

The Royal Research Ship (RRS), which is currently being built by Cammell Laird on Merseyside, is due to become operational in 2019, at a cost of $NZ4 million, will replace RRS Ernest Shackleton and James Clark Ross.

It will study ice sheets, ocean currents and marine life as part of the Cambridge-based British Antarctic Survey.

When it launched the competition, Nerc said it was looking for "something inspirational" that would exemplify the ship's work, but that did not prevent people making suggestions which also included Pingu and It's Bloody Cold Here.

Usain Boat and What Iceberg? had been among nearly 7,000 other suggestions.

A spokesperson for NERC said: "Thank you to everyone who has taken part in the Natural Environment Research Council's Name Our Ship campaign.

"We've had an extremely high volume of suggestions and will now review all of the suggested names.

"The final decision will be announced in due course."