The Indian capital Delhi is on the brink of a severe water crisis after a key supply was cut during protests over jobs in a neighbouring state. 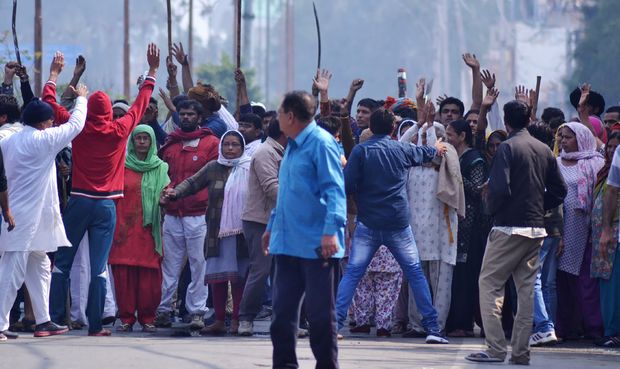 Indian residents gather on a street as others gesture to hold them back amid ongoing caste protests in Rohtak. Photo: AFP

Demonstrators from the Jat community damaged equipment in the Munak canal, a major source of water to Delhi.

The city has introduced strict water rationing. Some areas could run dry on Sunday, officials warned, and schools will not open on Monday.

The Jats are currently listed as upper caste.

They argue this puts them at a disadvantage in government jobs and at state-run educational institutes and are demanding job quotas similar to those granted to lower castes.

At least nine people were killed as violence continued on Saturday.

Protesters went on the rampage despite a curfew and the deployment of the army, which is reported to have opened fire on them in the districts of Rohtak and Jhajjar.

The violence has forced the closure of several key roads and national highways, and paralysed the railway system in north India.

The bus service between India and Pakistan has been affected, too, with passengers left stranded.

On Friday protesters in Rohtak hurled rocks at security forces while blocking traffic, attacking vehicles and attempting to set the finance minister's home on fire.

The local Delhi government has approached the Supreme Court seeking its intervention in the water crisis.

A year ago, the Supreme Court removed Jats from the list of Other Backward Classes (OBCs) benefiting from the system.

Haryana Chief Minister Manohar Lal Khattar has already said that the government is ready to agree to the demands of the protesters "within the ambit of the constitution".

Opposition parties have called for Mr Khattar's government to be sacked by the central government and for presidential rule to be imposed on the state.

India's constitution, adopted in 1950, inaugurated the world's oldest and farthest-reaching affirmative action programme, guaranteeing scheduled castes and tribes - the most disadvantaged groups in Hinduism's hierarchy - not only equality of opportunity but guaranteed outcomes, with reserved places in educational institutions, government jobs and even seats in parliament and the state assemblies.

The logic was simple: they were justified as a means of making up for millennia of discrimination based on birth.

In 1989, the government decided to extend their benefits to Other Backward Classes (OBCs) - those hailing from the lower and intermediate castes who were deemed backward because they lacked "upper caste" status.

As more and more people sought fewer available government and university positions, we witnessed the unedifying spectacle of castes fighting with each other to be declared backward.