Two Golden Bay residents are among the foreigners rescued in eastern Indonesia after a tourist boat travelling between islands sank on Saturday night. 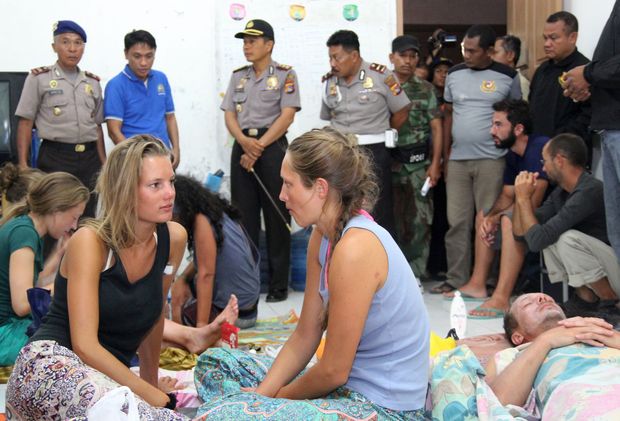 Survivors from the boat recover at a house near the Indonesian town of Bima. Photo: AFP

Twenty foreign tourists, an Indonesian guide and four crew were on board when the boat foundered near Sangeang Api, a volcanic island off Sumbawa, the BBC reports.

Twenty-three people have been found alive but two foreign tourists are still missing.

Gaylene Wilkinson and Tony Lawton were among those first rescued after spending hours in the water. Family friend Paul Kilgour said they were a gutsy pair.

"They would probably be the ones that would be encouraging all the others to stick together," he said.

"They'd probably tell them and 'we'll swim 6km to that island over there and we'll all get there'.

"I could just see Gaylene and Tony doing that."

The New Zealand embassy in Jakarta confirmed Ms Wilkinson and Mr Lawton were safe and well, and said there was no indication other New Zealanders were on the boat.

Ten people, including the two New Zealanders, were rescued initially and a further 13, including all the crew, were found alive early on Monday.

They are being treated in hospital for trauma and dehydration as a search continues for the remaining two people.

Officials said the incident took place when the boat, sailing from Lombok to Komodo Island, hit a reef and sank.

Rescue official Budiawan, who goes by one name, told AFP the second group "were all found together; some in a lifeboat and some floating with their life jackets".

The survivors were recovering in Sape city in Sumbawa, he said.

The Indonesian military has joined the search to find the two tourists who are still missing, the BBC reports.

Those rescued include people from Britain, Spain, France, Germany and the Netherlands, as well as the New Zealanders.

Komodo Island is the home of the Komodo dragon, the world's biggest lizard and a draw for tourists.