The Thai army has imposed martial law amid a political crisis "to preserve law and order". The surprise announcement on Tuesday granted it sweeping powers to enforce its decision.

The military insists it is not a coup. Soldiers have taken over television and radio stations, and blocked off roads in the capital Bangkok. 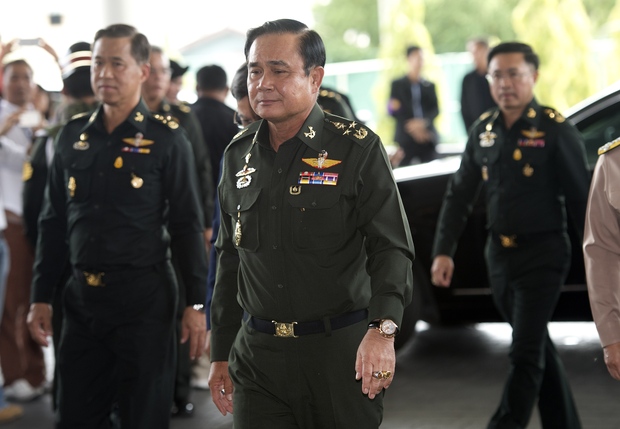 General Prayut Chan-O-Cha (centre) arrives for a meeting at the Army Club in Bangkok on Tuesday. Photo: AFP 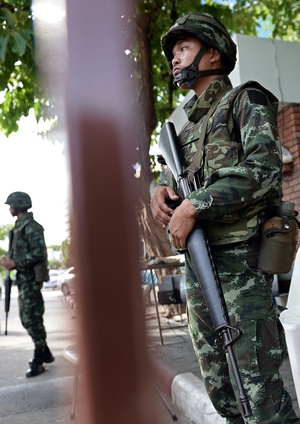 Soldiers occupied the compound of the National Broadcasting Services of Thailand. Photo: AFP

The government called an urgent meeting after it was not informed of the move.

Martial law comes after months of escalating tensions between the government and the opposition, the BBC reports.

Correspondents say the move could enrage supporters of the government, especially if it is seen as amounting to a coup. The army has staged at least 11 coups since the end of the absolute monarchy in 1932.

Soldiers have moved into the main government building in Bangkok, which has been unoccupied following months of violent demonstrations by opponents who want to be rid of an administration they say is corrupt.

The military has also ordered media censorship in the interests of "national security".

Both pro and anti-government protesters have been told not to march anywhere in order to prevent clashes.

The military statement was signed by General Prayuth Chan-Ocha, citing a 1914 law that allows it to intervene during times of crisis.

Earlier in May, a court ordered Prime Minister Yingluck Shinawatra and several Cabinet ministers to step down.

Ms Yingluck's brother Thaksin Shinawatra was ousted as Prime Minister in an army coup in 2006. He now lives in exile.

Ms Yingluck's government took office after winning elections in 2011. Her party has broad support outside the capital.

New Zealand's Ministry of Foreign Affairs and Trade is reviewing its travel advice for Thailand. A spokesperson says the current "high risk" warning remains in place for southern provinces and border regions. "Some risk" is advised elsewhere in the southeast Asian nation.