Ten people have been killed and over 70 wounded in two bomb attacks at a busy market in Nairobi, the latest in a wave of unrest blamed on Kenya's Islamist militants.

The twin bombings came as hundreds of tourists were being evacuated from beach resorts near the port city of Mombasa after Britain's Foreign Office and other nations, including Australia, issued new travel warnings. 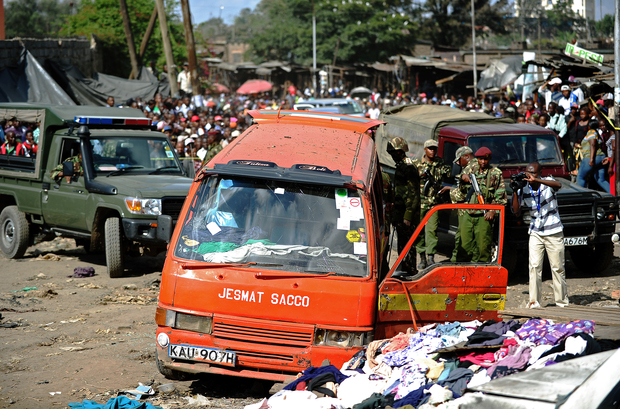 The scene of the explosion in Gikomba on the outskirts of Nairobi's business district. Photo: AFP

The National Disaster Operation Centre said the first blast in the capital occurred next to a 14-seater public minibus, and the second was inside a shop in Gikomba Market close to Nairobi's central business district.

Nairobi police chief Benson Kibue confirmed that two bombs had been used, and the area was littered with debris including clothing hurled onto overhead power and telephone lines.

"Two IEDs were detonated simultaneously," Nairobi police chief Benson Kibue told reporters at the scene, trying to reassure an increasingly sceptical public that the security forces are in control. "Don't panic. We are on top of things," he said.

The United States condemned the "latest in a series of cowardly attacks on innocent civilians in Kenya" as "despicable."

AFP reports that Kenya has been targeted by Somalia's Al-Qaeda-linked Shebab rebels since sending troops to war-torn Somalia in 2011.