United States First Lady Michelle Obama says the mass kidnap of schoolgirls in Nigeria is part of a wider pattern of threats and intimidation facing girls around the world who pursue an education. 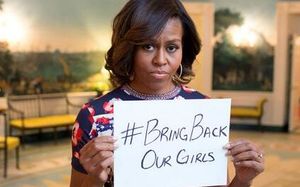 In an address on radio on Saturday, she said and the president are "outraged and heartbroken" over the abduction on 14 April of more than 200 girls from their school.

She was speaking instead of her husband in the weekly presidential address.

Eight more girls were kidnapped from another school on 5 May. Three weeks later, 223 girls are still missing.

Boko Haram, an Islamist group, has claimed the abductions.

Mrs Obama said the girls reminded her and her husband of their own daughters.

"What happened in Nigeria was not an isolated incident. It's a story we see every day as girls around the world risk their lives to pursue their ambitions," she said.

She cited the Pakistani schoolgirl Malala Yousafzai, who was shot and wounded by the Taliban for speaking out for girls' education.

The BBC reports it is unusual for a US first lady to make outspoken foreign policy remarks, but Mrs Obama has campaigned for the girls' release.

It was the first time Mrs Obama has delivered her husband's weekly radio address.

Earlier this week, she tweeted a picture of herself in the White House holding a sign with the message "#BringBackOurGirls".

Boko Haram means "Western education is forbidden". The group has admitted capturing the girls, saying they should not have been in school and should get married instead.

British and American advisers are now helping the Nigerian Army hunt for the girls.