The man in charge of the search for the missing Malaysian airliner says he's confident it will be found, but it could take up to a year.

The hunt for the plane has moved from an aerial to an underwater search in an area of the southern Indian Ocean. 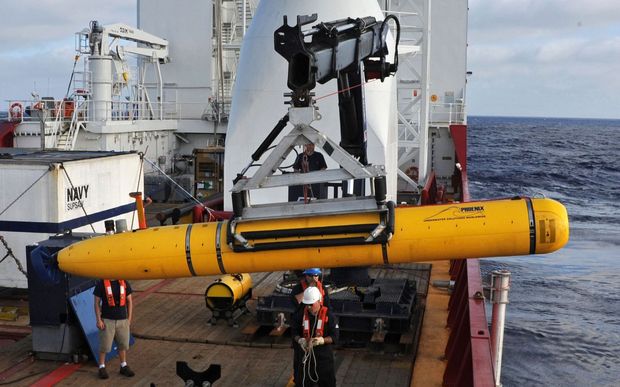 The seafloor search is all that's left: the Bluefin-21 has until the end of May. Photo: AFP

Australia will host a meeting with Malaysia and China next week to determine the way forward in the frustrating search for flight MH370.

The Canberra meeting, announced by search coordinator retired Air Chief Marshal Angus Houston, follows the decision this week to scale back the search operation in the Indian Ocean that has so far turned up no sign of the Malaysia Airlines plane.

"That's a very important meeting because it will formalise the way ahead to ensure that this search continues with urgency and doesn't stop at any stage," said Air Chief Marshal Houston, who is on a brief visit to Malaysia.

Malaysian transport minister Hishammuddin Hussein, who spoke to reporters alongside Australia's former defence chief, said he would attend the meeting.

Officials have said recently that more sophisticated assets may need to be brought in for the so-far fruitless search of the Indian Ocean seabed for wreckage.

An intensive aerial search for surface wreckage from flight MH370 officially ended on Wednesday, with ships also moving out of the remote search zone.

Australian authorities have said the focus would move "over the coming weeks" to an intensified undersea search.

Flight MH370 disappeared on March 8 with 239 people aboard and is believed to have inexplicably diverted to the Indian Ocean and crashed, but no evidence has been found.

Officials have said the focus will shift to an expanded underwater search with a sophisticated US Navy sonar device across a huge swathe of seabed.

While saying the challenge was immense, Air Chief Marshal Houston said he was confident MH370 would be found.

"The search will take probably something in the order of eight months ... eight to 12 months if we have bad weather or other issues," he said.

"We are totally committed, as three nations I believe, to finding MH370 and I am confident that with an effective search we will find the aircraft."

China is involved because two-thirds of the passengers were Chinese.

Another month for Bluefin

The submersible Bluefin-21 has been scouring the seabed in an area where undersea transmissions were detected, believed to have come from the plane's black box flight recorders before their batteries died.

Air Chief Marshal Houston said the Bluefin-21 would continue scanning until the end of May.

The zone was determined based on an analysis of imprecise data from satellites that detected the plane as if flew.

Mr Hishammuddin and Air Chief Marshal Houston both said they still believed the search was in the right area.

Authorities earlier this week dismissed claims by an Australia-based marine exploration company that it had detected elements in the Bay of Bengal, far to the north, consistent with aircraft materials and which could be from MH370.

Air Chief Marshal Houston said three ships from Bangladesh were looking in that area but had so far found nothing.

Meanwhile a preliminary report into the disappearance of MH370, released on Friday, shows it took authorities four hours to activate a search and rescue operation after they lost contact with the plane.