A quick look back on the past finalists should tell you all you need to know about how we got here, writes Hussein Moses. 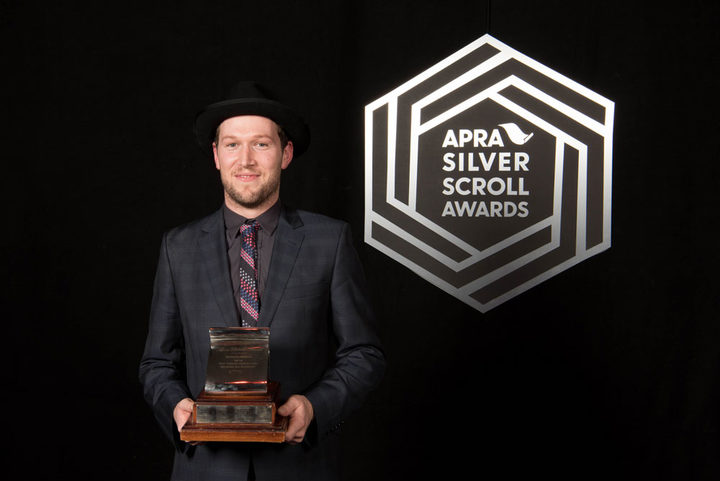 If I Move To Mars, written by Wellington singer-songwriter Thomas Oliver, came up triumphant over recent singles from Street Chant (RIP), Tami Neilson, Lydia Cole and The Phoenix Foundation to take out this year’s APRA Silver Scroll award.

Yup, that’s the same guy that’s YouTube-famous for a lap-steel rendition of the Jurassic Park theme, which is a whole nother conversation we’re going to need to have at some point. For now though, please let it sink in that a song which can basically be described as “The Martian crossed with Jack Johnson” is about to have its own very odd moment in New Zealand music history.

Even though Thomas Oliver might be the one making headlines today, it was Moana Maniapoto who gave us the wake up call we so sorely needed last night. Known for her time in Moana and the Moahunters and Moana and the Tribe, she was in the building to be inducted into the NZ Music Hall of Fame and, in an early highlight of the evening, she delivered a speech that was insightful, humorous and revealing all at once.

She didn’t hesitate to quote Reverend Al Sharpton – “You got to stand for something, because if you don’t stand for something, you’ll fall for anything” – and amongst stories like the one about growing up with Annie Crummer and wishing they were Chaka Khan, she used the platform to point out that when you don’t hear someone like you on the radio or see someone like you on TV, it’s easy to come to the conclusion that maybe your culture just doesn’t matter.

Stuff all had changed, she said, and the classic excuse that’s always used is that Māori language music doesn’t fit the format.

“Journalists always ask me, ‘what comes first, the music or the politics?’ And it’s a dumb question, really, because it’s all interlinked. When you’re Māori, you’re a walking, breathing political statement. There’s expectations and responsibilities piled on you.”

But it might be about time that some of those same thoughts were extended to the Silver Scrolls themselves, because it’s hard to ignore the fact that the most powerful New Zealand song in recent history – Don’t Rate That by David Dallas – didn’t even make the shortlist for this year’s awards.

“There’s a palpable frustration that comes through on Don’t Rate That,” Sarin Moddle wrote last year, “and whether that’s the result of writer’s block or just being a human alive and aware in the world, it’s invigorating to hear David Dallas take systematic aim at everything from payday loan companies in South Auckland to the racist and xenophobic framing of the Auckland housing crisis.”

A quick look back on the past finalists should tell you all you need to know about how we got here. There hasn’t been a single rap song in the Silver Scrolls top five since Scribe took out the award for Not Many back in 2004.

That feels like a lifetime ago now and it’s not like the entire genre went dormant in the meantime. How has Home Brew or @Peace never even been shortlisted since then? Or PNC? Or Sid Diamond?

Why are we treating New Zealand hip hop like a footnote when it’s been thriving all this time?

Something doesn't add up, but maybe it’s the judging process that’s to blame. While the top 20 who were in contention for the Scroll were hand-picked by a panel of critics, the actual winner of the award is decided on by votes from the 10,000+ APRA members themselves.

Here’s one possible solution: flip the judging process and let the critics (or whatever’s left of them) determine the most deserving recipient. Maybe then we won’t end up with a song that literally talks about being at one with the universe.

This might sound like an “I’mma let you finish” moment, but whatever. It's been seven years since that happened now; here's hoping it won’t take nearly as long for us to figure out what we could be doing better in our own little corner of the world.