As part of upcoming anthology The Greatness of Dads, food writer/actor Sam Mannering reflects on the hardest conversation he ever had with his. 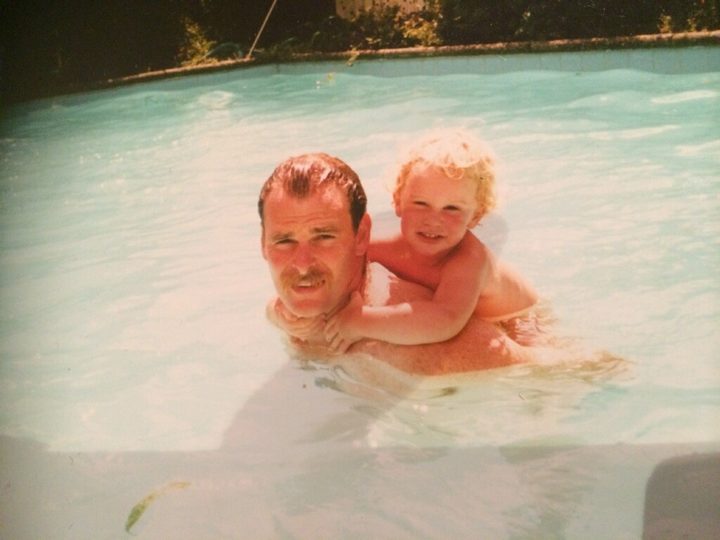 Sam and his dad. Photo: Supplied.

My father, Roger Mannering, is a dairy farmer. He grew up in the Waikato. His father was a military man, through and through. Precise, old school and proper as you like. Incredibly dapper and well spoken and well read. A perfect gentleman.

Dad’s not really like that at all. You see elements of it – the way he holds a knife and fork – but he’s very much a man’s man, a rugby player, very blokey.

Dad was 26 when I was born. He and my mother married at 25, and it was a bit of a cliché – he was the best man at a wedding; she was back from Scotland for six weeks and at the wedding. She had been living in Scotland for a couple of years, but she never returned after that.

I was born in the Waikato and lived there on a farm till I was about eight or nine. Then we moved to Canterbury. I’m the oldest and we’re a bit like the Von Trapps – we’re all three years apart. There are four of us – three boys and my sister, who’s the youngest. Dad has never called any of us by our names. He’ll call me Fred or Horace. He’ll call Mum George. My sister goes by Myrtle, Tinkerbell, Fluffy or Flossy. He’s always been Podge – or Podgey.

He’s six foot four and got these huge farmer’s hands and he envelops you in a hug. But you also would never mess with him.

We grew up roaming, really: fishing, getting into trouble, hanging out with the calves, building huts in the hay sheds. There Dad was, getting the tractor in, creating these amazing hay-bale forts we’d spend weeks in.

If he was near, you knew nothing would go wrong. He’s six foot four and got these huge farmer’s hands and he envelops you in a hug. But you also would never mess with him.

He’s always been a shrewd businessman. When we moved to Canterbury, we were surrounded by crop farmers and scrubby little farms. He saw the opportunity in dairy farming and he jumped on this new world of opportunity when no one was doing it. You give him a project, and he’s on it.

When I did my first cookbook, he had reservations. It was hard for him to understand, as it’s not a conventional career. But he had my best interests at heart. He’s never worked in hospitality and it’s not the way his mind works, but the amount of support and advice he’s given me when starting my own café – man. He’s very practical and considered and will take things one step at a time. Things have to be thought about, and there has to be a process.

He’s certainly a person of his generation. When he gets talking about music, it’s all about the eighties –people like Talking Heads, the Finns, Van Morrison. He’s also had a moustache for as long as Mum’s known him, since ’79 or ’80, and still now at the age of 56. We’ve always given him stick about it, but it’s really grown on me. As a teenager, I’d think, "Why can’t you shave it off?" but now it’s just a part of him.

The hardest conversation we ever had? Definitely about me being gay.

I was 12 or 13 when I knew, so I’d known for 10 years before I told him. Going to a boarding school, where everything’s quite traditional, there was no need or want to confront that particular aspect of my life.

So, I went through my teens shelving it, thinking, "What is my rugby-playing, dairy-farming father going to say about this?" Then it became very apparent, so I went to stay at the farm and spoke to Mum about it. We had a bit of an argument about who I was seeing and there was tension in the air.

The next day, he approached me in the kitchen. "Right," he said. "Your mother’s a bit concerned you’re feeling beside yourself about the fact you’d rather chase boys than girls. That’s ridiculous. We love you regardless."

Then he hugged me and walked off. It was one of the most gratifying conversations of my life. For him to be so nonchalant about it was unbelievably cathartic. The way he talked about it made me feel OK about it. It wasn’t a big deal and he didn’t make it a big deal. Nothing more needed to be said.

Ever since, there’s nothing I’m not able to tell him. That was the one secret I’d kept from him, and after that, there was nothing between us.

The Greatness of Dads, by author Kirsten Matthews, is a book of stories, insights, wisdoms, embarrassments and truths about real-life dads. It can be found here.