The country's best young orators have taken to the stage as part of the first day of the renowned Ngā Manu Kōrero competition. 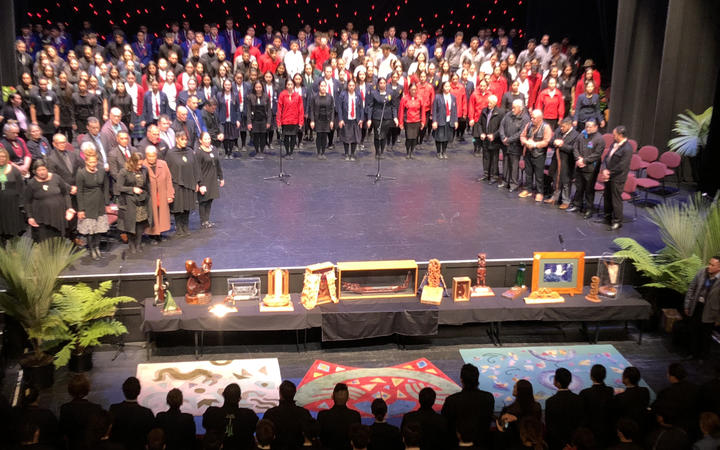 Sixty students representing 15 regions will be competing in the two-day event in both the te reo Māori and English categories, covering both prepared and impromptu speaking.

It's one of the biggest events in te ao Māori, running for 54 years, and has been described as a stepping stone for the country's future leaders.

This is one of the first times the event has been open to the public for free, for anyone to attend.

The chairperson of the host committee - Manawatū Horowhenua Māori Teachers Inc, Nick Fonotoe, said the region has been very excited about hosting the event.

"Its very important to us that our students excel in oratory but not just that, the responsibilities they have to their own whānau, hapū, iwi and communities. The topics and the thoughts they convey they have actually discussed with their whānau and teachers and it's something that they actually truly represent on and off the stage. I believe it is a stepping stone for our youth to become the leaders of the future."

Mr Fonotoe said having the whakataetae during Te Wiki o te reo Māori highlights its role as a beacon of Māori language revitalisation and a measure of how far te reo Māori has developed in the past 20 years.

"There is a strong sense of urgency within our communities to protect our indigenous Māori language and this commitment to ensure te reo Māori survives as a living, spoken and dynamic treasure is captured within the essence of Ngā Manu Kōrero," he said.

The senior students took to the stage this morning for the impromptu part of the day, with impassioned speeches about the impact of colonisation on Māori and the importance of whenua to our people.

In their pressed uniforms, pounamu and taonga gleaming, and some with korowai draped adoringly on their shoulders, they spoke of the biggest issues facing not only rangatahi but all Māori.

One of them, Shaye Witehira, a former Ngā Manu Kōrero winner from Manukura took the government to task.

"Consecutive governments know all too well the effects of land loss and colonisation on Māori even with this government new budget 'claiming' to address well-being. Let us be very clear - money will never replace mana, mana whenua, mana tangata."

Another speaker, Maarire Puketapu from Wainuiomata High School spoke about returning to the ways of her ancestors as a means to empower iwi Māori.

Another tauira from Selwyn College, Coco Lance, spoke on the kaupapa of technology among rangatahi.

"I believe technology is empowering and connecting especially for us rangatahi today. In social media yes, there can be the bad, but there also can be the very good, especially for us Māori. Awhile ago I came across Hana Tapiata, a social media influencer, and was astounded by how amazing she used her platform, she spoke about the complexities in identity, she spoke about the issues that Māori face today, and it was empowering for us youth to look at this person as a role model."

The event is being broadcast on iwi radio and you can watch the live stream of the event on here.