The Maori Party has chosen its candidate to stand in the general elections for the southern Maori seat of Te Tai Tonga. 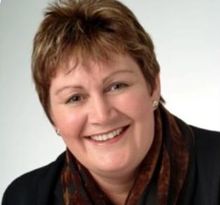 Ngaire Button, of Tuhoe and Ngati Porou descent, was Christchurch's deputy mayor from 2010-13.

The mother-of-six has held a number of positions, including being a director of the Canterbury Development Corporation, VBase, and Civic Building Ltd.

Mrs Button said her campaign would focus on reinforcing the Whanau Ora policy championed by the party's co-leader, Tariana Turia.

"The main campaign theme for the Maori Party is Whanau Ora and rangatiratanga, and that is that the Maori Party represents Maori front and centre. We are the only party who has Maori purely at our heart and the interests of Maori in every decision", she said.

"Whanau Ora is a very important part of our kaupapa as well as manaakitanga (caring for people) and rangatiratanga (self determination)."

Mrs Button said although she has a high profile in Christchurch, she is looking forward to meeting more communities throughout her huge electorate which spans from Wellington in the north, covers the whole of Te Wai Pounamu, including Rakiura, or Stewart Island.

The Maori Party will announce its Te Tai Tokerau candidate on Saturday.