A survey suggests the most modern Maori cultural practice for tangata whenua is to watch a television programme about themselves. 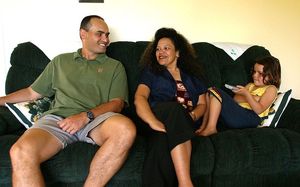 The details are included in Statistics New Zealand's first survey on Maori well-being.

Of those surveyed, 75 percent put television at the top of their cultural activity.

Next, about 60 percent expressed their identity by exploring their whakapapa (family history).

That was closely followed by tangata whenua singing a Maori song, performing a haka, giving a mihi or speech, or taking part in performing arts and crafts.