Iwi, scientists and children marched on Parliament on Tuesday demanding a stop to the commercial fishing of longfin tuna or eels.

The groups say it will be fished to extinction unless a temporary ban is imposed. They say the end of tuna would be a huge cultural loss for Maori.

A 200-metre long 'Tuna Tapestry' created by schoolchildren with help from whanau and teachers snaked its way around the front of Parliament on Tuesday and a petition with 10,000 signatures was delivered. 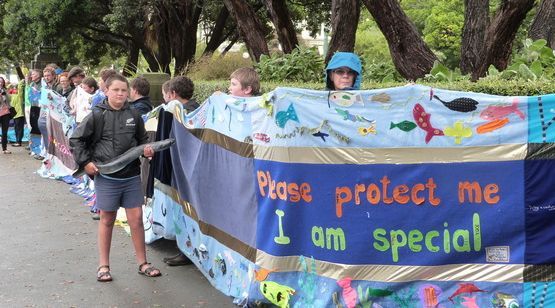 Children have marched on Parliament seeking protection for the native eel. Photo: RNZ

Massey University freshwater ecologist Mike Joy says the Ministry of Primary Industries' estimate of how many longfin eels are left is inaccurate.

Dr Joy estimates the juvenile population has dropped by 75% and says fishers cannot even reach the quota set by the ministry as there are so few left.

He believes there is a tipping point at which time it will be too late to save the eel.

Environmental scientist Caleb Royal says commercial eeling has stripped many lakes and rivers of the fish and a freeze is the only way to prevent it from becoming extinct.

The Ministry of Primary Fisheries said in a statement that it has reduced the quota for catching North Island longfin eel by 60% and a range of other restrictions are in place to protect eels and their habitats.

The ministry says it will look at whether this needs to be reduced further later in the year when new research for eel stocks becomes available.