The Rugby World Cup is now in full swing; upsets, tackles, refs and despair, but there's been a whole lot more to coverage than just the rugby.

Performers in kimonos stand on the pitch ahead of the opening match of the Rugby World Cup. Photo: AFP

Let's start with the Welsh super-fan from Auckland's Hibiscus Coast who has put his mobile coffee van business on hold to head to the Rugby World Cup to watch Wales.

He has left a letter for his customers saying he is off to support "my beloved Welsh Rugby Team in the Rugby World Cup" and listed a number of possible return dates, depending on how deep Wales progress in the tournament. If they win, he says, he might be celebrating to Christmas.

On the subject of super-fans, RNZ rugby reporter Joe Porter caught up with a bunch of Sri Lankan fans who love rugby - and love the All Blacks.

Not only that, they are fans of Steve Hansen; they reckon he is the best. "He is a smart dude, you know. Steve Hansen, he knows what to do."

The Defence Blacks are the NZ Defence Force rugby team and they've been playing an alternative World Cup while the big one is on.

But, as Joe Porter found out, they are having a wonderful time after being mistaken for the All Blacks at every pit stop their bus pulls up at.

They've even been invited to be photographed with babies.

Leilani Momoisea has been catching up with people who have made it big in Japan.

There is Alando Soakai, former junior All Black, Highlander and NZ Sevens representative.

He played five seasons as a profession for the Tokyo-based Kubota Spears and then their coaching staff.

"I feel, especially the Tongan players, they seem to succeed here because they understand the culture. There is a lot of similarities between the Pacific way and the Japanese way."

He said a big thing is the mutual respect for their elders.

And then there is Takai Palei who arrived in Japan from Tonga in 1991 and has carved out a life for himself through work, the Tonga church and the Tonga-Japan community.

If you are thinking of heading to Japan for the rest of the Rugby World Cup - or maybe you are there already - you couldn't do better than have Joe Porter as a guide.

Here he is on eating and walking: "Eating 'on the run' or while walking/travelling is considered rude in Japan, and you'll notice sideways glances if you do.

"Drinking isn't considered quite so rude, but is also best to avoid if possible. The supermarkets or mini marts all have seating areas to eat." 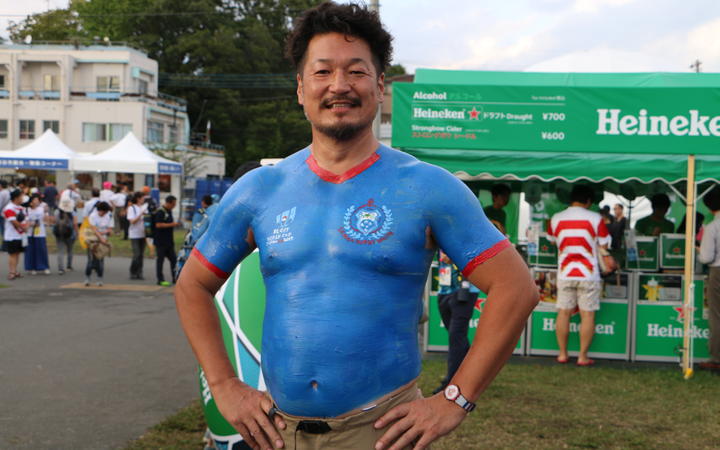 Some of the most passionate fans are following the Pacific Island teams and we have done some fascinating interviews with the people who love their team.

Here are the fans of the Manu Samoa team.

RNZ Pacific reporter Vinnie Wylie also caught up with the families following the Pacific teams and supporting the players.

It's not just Pacific fans who are passionate.

When All Black prop Ofa Tu'ungafasi took to the field in the All Blacks vs South Africa match, his brother and cousin were in the stands brimming with pride, and with the knowledge of all the hard work and sacrifice it took to get him to this moment.

And finally, there is the Japanese fan who has decided to paint himself with every team's jersey - as you do.

It hasn't been all plain sailing at the cup, though. There's been ongoing fall out about Spark's coverage, questions about World Rugby's commitment to Pacific Islands rugby and don't mention the Irish.

We have done our fair share of analysis of the Spark streaming service. Here's RNZ columnist Hamish Bidwell's take.

"Lord help me the next time someone says streaming is the future. The future? It's been here for years.

"Tricky thing, the future. It can be hard to predict. Just not in this instance.

"Spark's coverage was never going to stand up to scrutiny. The system was always going to have problems and people, having paid for the privilege, were always going to voice their disappointment."

Spark Sport has experienced some issues with its broadcast of the Rugby World Cup. Photo: RNZ / Martin Gibson

Then there are the Pacific teams who are feeling hard done by - from World Rugby, neglect, refs' calls, high tackle rules.

Manu Samoa has sent a please explain letter to world Rugby about why two of its players have ended up with bans for dangerous tackles.

Worse, Fiji managed to lose Uruguay, sparking celebrations that the South Americans had arrived on the world stage. The problem, said Bidwell, is not that Uruguay has arrived, it's that the Pacific teams are in danger of leaving.

"Good on Uruguay, but this is not a time for World Rugby to rejoice. No, they should feel utterly ashamed at how Fiji, Tonga and Samoa have been allowed to slide into mediocrity and irrelevance."

But like all good world tournaments, there are players whose stars rising (and, yes, some falling). Who can forget the Springbok wing Cheslin Kolbe dancing past All Black tacklers - seemingly the only Springbok able to conjure line breaks.

On the All Black side there are the Barrett brothers. All three of them.

Elsewhere, there is the inspiring story of the Tongan player who just a few months ago was a roofer in Christchurch, playing for the local Shirley rugby club.

Now he is playing for Tonga on the biggest stage in world rugby.

Good on you, Siua Maile.