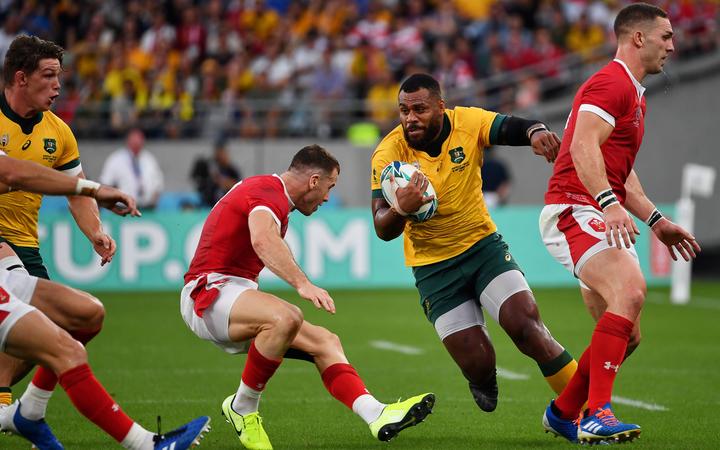 Australia's centre Samu Kerevi runs at an opponent in his side's 29-25 loss to Wales at the 2019 Rugby World Cup. Photo: AFP

Never mind the agony and the ecstasy, being made to laugh by the absurdity of sport really can be a pleasure. And nothing's been more amusing at this Rugby World Cup, than the reaction to Samu Kerevi's penalty as Wales beat Australia 29-25.

What's that sound you hear? Oh yes, it's the unmistakable cry of old men howling at the moon.

Look, there's a few strands to this Samu Kerevi thing. First, the Wallabies centre has hit Wales' Rhys Patchell in the throat and chin with a forearm.

Were they his first point of contact? No, but Kerevi hit them all the same. Is that allowed in rugby? No, it's not.

Does that make it a penalisable offence? Yes, it does.

The problem here - and the worry for the rest of the world cup - is how the decision was arrived at.

Television Match Official (TMO) Ben Skeen - who's associate headmaster at Auckland Grammar School by day - interferes with on-field matters on a serial basis, with this being just the latest example.

France's Romain Poite - best known in New Zealand for not having the nerve to award the All Blacks a series-winning penalty against the British and Irish Lions in 2017 - was the indecisive man in the middle.

Between the two of them they took an age to conclude Kerevi had committed an act of foul play.

People fear this kind of thing. They fear a game of consequence going along on its merry way - without the three on-field officials, television directors or commentators noticing anything untoward - until a TMO pipes up about something they saw a few phases or minutes back.

They're right to worry. Slow-motion replays rarely reflect the truth of incident and, to be honest, you could probably find atrocities in most collisions or breakdowns. It's all about how keen (or is that Skeen?) you are to find them.

As for Kerevi, he says he's run like that all his life and might as well go and play in the NRL now. Well Kerevi, who has a three-year rugby deal in Japan to take up after this tournament, should be careful what he wishes for. 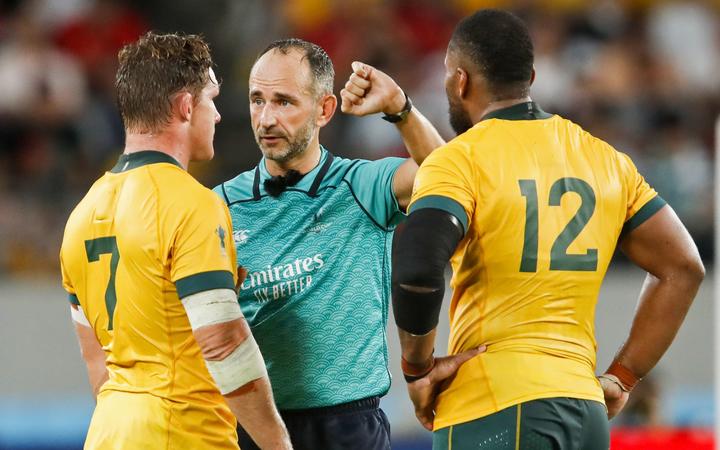 The Wallabies are still smarting from the ban handed out to wing Reece Hodge, as well as the battle they're fighting for relevance.

Australia's biggest football competition, the AFL, had its grand final in Melbourne on Saturday, while the NRL concludes in Sydney on Sunday. Rugby simply doesn't rate in Australia, which is partly why reactions to Hodge and Kerevi from that country have been so hysterical.

Wallabies coach Michael Cheika says he's "embarrassed'' to be a rugby person, in light of these incidents. Frankly, Cheika's words might have more currency if he was critical of things less often.

Only he's not alone here. The rugby world over, men of a certain age are outraged by the penalty awarded against Kerevi.

The game's gone soft, and all that.

The truth is the game's never been harder, nor the attrition rate higher. What's changed is that World Rugby are rightly placing more emphasis on protecting the head of players. Referees and officials won't always get that right, but they have to try.

In age-group rugby players can't fend above what's referred to as 'the nipple line'. Soon tackling heights will be the same.

You can't protect the head of players if the upper chest and shoulders are fair game. Something has to change.

If that causes old men to cry into their beers, or Twitter accounts or whatever, then it's a small price to pay for player safety.

You'd imagine Ireland will still win Pool A and Japan will battle to qualify for the quarterfinals, despite Saturday's result.

Japan's 19-12 win over Ireland was good for the tournament's profile and added a bit of buzz, but it's doubtful how much impact it will have. Japan still need to beat Scotland and Samoa to get out of the pool - and earn themselves a likely last-eight clash with New Zealand - and that's a big ask.

Ireland don't look great, do they? Their grinding, spoiling style might suit the damp conditions in Dublin, but it's going to take more than boxkicks to win in Japan.

The return of a stranger

Hey, the All Blacks are back. Only to play Canada, admittedly, but you could be forgiven for forgetting they're actually at this world cup.

If we assume New Zealand are going to beat Canada, Namibia and Italy in their remaining Pool B matches, what will the cumulative points tally be? Two hundred? Three hundred? You imagine there will be a couple of cricket scores in there.

Such is the scant nature of the opposition that it's going to be very hard to read how the team is tracking ahead of the knockout matches.

It's hard not to feel 20 is too many teams for these 'pinnacle' rugby events.