Blood might be thicker than water but it's swimming that binds a former New Zealand Olympic backstroker and her granddaughter.

Ngaire Galloway, who is almost 93 and lives in a Nelson resthome, is New Zealand's oldest living Olympian.

Seventy years after she swam backstroke at the London Olympics, her granddaughter Gina Galloway is about to compete in the same event at the Youth Olympics in Buenos Aires.

The pair caught up in Nelson on Friday, ahead of Gina's departure for Argentina.

And while it might have been seven decades ago the memories come flooding back when Ngaire watches her granddaughter Gina backstroking her way though a pool. 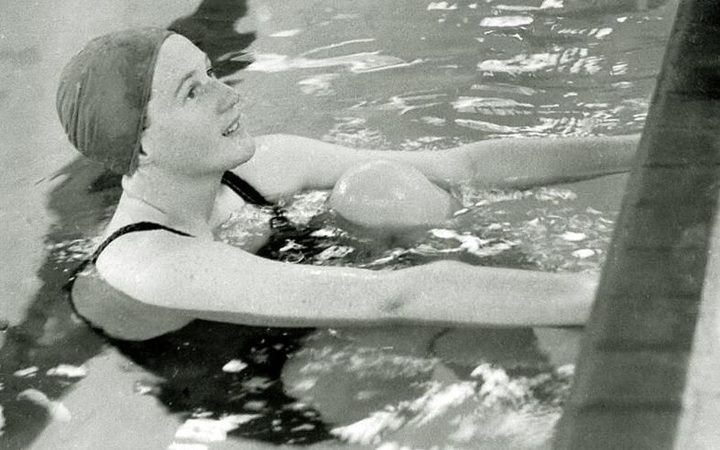 "A sort of longing really, inside me. I look at Gina swimming and think, 'golly, the stroke's changed a bit'. And I don't think I had killer instinct really."

Ngaire might feel she lacked the killer instinct but she is an inspiration to Gina.

"For me, it's just that passion for swimming, and the love of it.

"Diving into the water...the thrill of it - the thrill of racing and competing. I'm definitely a competitive person and Iove the challenge of trying to better myself, and seeing Nana going to the Olympics has definitely inspired me." 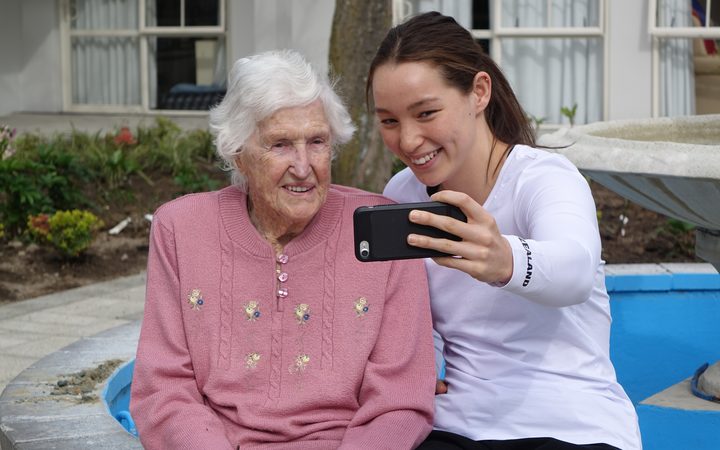 Ngaire, who at the time was Ngaire Lane, was the only female athlete in the seven-strong New Zealand team at the 1948 Olympics.

It was soon after the end of World War 2, and London still wore fresh scars.

Ngaire's training did not stop on the six-week journey by sea from New Zealand. The ship's carpenter built her a two-metre long oblong box, lined it with canvas and filled it with seawater each day, so she could lie on her back and practise her kick.

"I suppose it very minimally...it did help but you can imagine, lying in a tub-thing, kicking. It was very difficult." 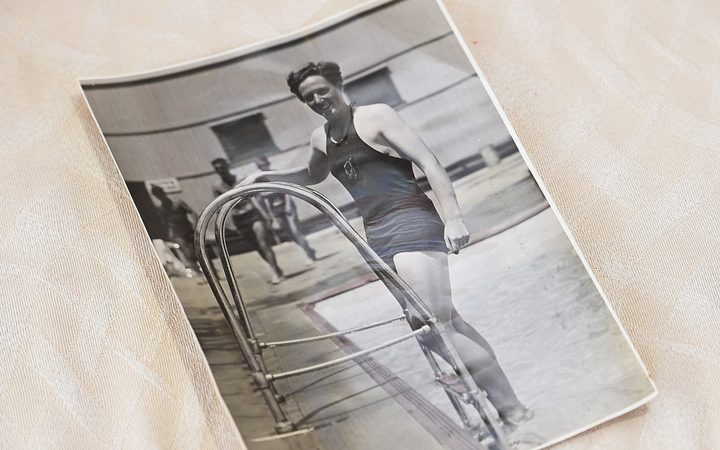 She even had to wear a borrowed swimsuit at the Empire Pool in Wembley.

"It belonged to a boy and it was a bit short around the bust area.

"Silk suits were unavailable because of the war, really, and so that was all I had."

Ngaire finished second in her Olympic 100m backstroke heat, seventh in her semi-final, and 11th overall.

But she did not come home empty-handed. In the Continental Relay Gala, held straight after the Olympic swim meet, her Australasian team won bronze in the 4 x 100m freestyle relay.

So is Gina love of backstroke in her genes?

"I don't know. I think I just naturally, really enjoy backstroke. It was the stroke I was doing best in and coincidentally, my brother is also getting quite good at backstroke."

The 17 year-old student at Auckland's Diocesan School for Girls, said her success was the result of a punishing training routine, and the support of her team mates.

"Nana Ngaire" keeps up with her progress via her iPad.

"Thanks to the technology we have today she's able to livestream into the races I'm doing. Dad always sends her the links so she can watch.

Ngaire said the only piece of advice she would offer her budding Olympian granddaughter, was to keep cool and calm.

"I don't ever have to tell her to keep focused; she's got that in spades, but to think of the moment - if you think of the very moment that what you're doing, is what you've got to do best."

And Gina is as proud to carry on the family tradition as she might one day be to stand on the Olympic dias.

"It's a really proud moment to continue the Galloway...or Lane but Galloway name in swimming.

"It's always going to be really proud, and special."

New Zealand will send a team of 61 athletes to the Youth Olympic Games, which is an international, multi-sport event for athletes aged 14-18.

The event, which takes place every four years, is promoted by the International Olympic Committee. The Buenos Aires 2018 Youth Olympic Games will be held from October 6 -18 with 4000 athletes from 206 countries.