Blyth Tait, back competing at international level for the first time in almost 15 years, is the best placed of the New Zealand eventers after the first day of dressage at the World Equestrian Games in the United States.

Tait is eighth in the individual standings with Sir Mark Todd in 14th spot and New Zealand fifth in the team standings.

Germany sit at the top the team standings, with Australia second and France third with another full day of dressage to come. 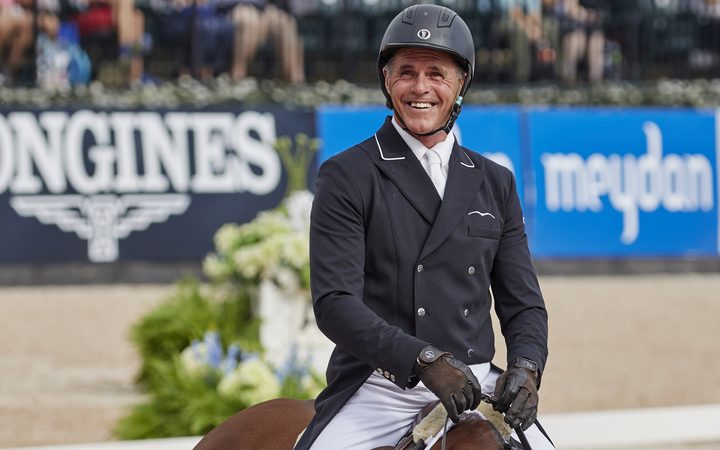 A pleased Blyth Tait on Dassett Courage completes the dressage phase in the eventing competition at the World Equestrian Games in Tryon in the USA. Photo: FEI

Tait, 57, has made no secret about just how happy he is to be back in an elite national team at a pinnacle event.

His record at world champs is impressive - in 1990 he won individual gold aboard Messiah and was part of the gold medal-winning team too.

The WEG didn't go so well for him in the Hague in 1994 where he was eliminated but he bounced right back in 1998 at Rome with Ready Teddy to take both team and individual gold again.

So, he figures things could work in his favour if his pattern continues.

He was pleased with the efforts of 14-year-old Dassett Courage.

"He is not that experienced at this level and it was a good solid first score for the team."

His "fantastic" team-mates had urged him to be brave, but he thought it sensible "not to rock the boat too much" as the first rider out.

"You need strength in numbers for a good team result."

"It was full of running with lovely canter and walk work," she said. "All his flying changes were superb, and he came out smiling."

Tait felt the cross country was a good galloping course, but it would be the luck of the draw as to what the weather was like on the day.

Sir Mark Todd got a huge welcome into the arena aboard his 11-year-old Holsteiner McClaren.

The horse is often likened to his superstar, double gold medal Olympian Charisma. While McClaren is only in his second "proper" season of eventing, Todd is attending his sixth WEG.

Together they produced a test that featured lovely moments of harmony and energy, showing the horse is most certainly one to watch for the future.

"He is very much a horse in the making but his greenness showed through in places. He has never seen anything like that and he felt a little distracted in there, and that is when the mistakes sneak in."

"He is a very brave and super jumper."