Embattled Springbok coach Allister Coetzee has launched an astonishing attack on South African rugby bosses in reaction to being told of his imminent sacking. 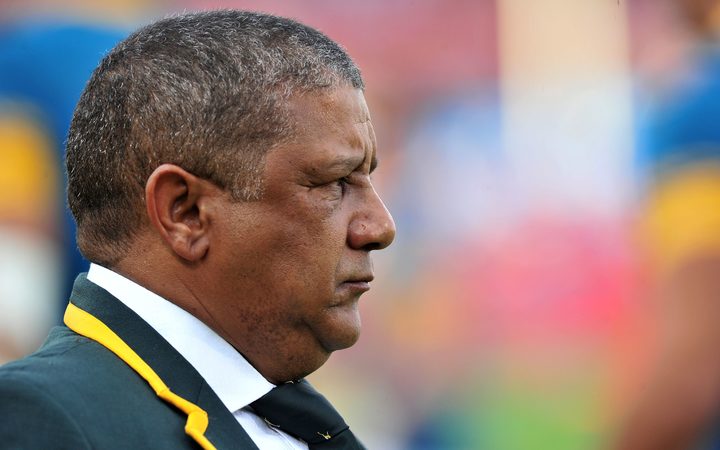 In a 19-page letter emailed by his legal team, the authenticity of which has been confirmed by the South African Rugby Union (SARU), Coetzee pins the blame for his torrid two seasons in charge solely on the governing body.

Coetzee, who managed just 11 wins from 25 tests as head coach, claims he was "set up to fail" and accuses SARU of deliberate attempts "to create a public impression of incompetence" and using him as a racial "pawn".

According to South African media outlet EWN, Coetzee was told his contract would be terminated at a meeting with SARU CEO Jurie Roux on January 18 and that newly appointed director of rugby Rassie Erasmus will coach the Springboks in 2018.

The former Stormers coach confirms he was offered a ceremonial role as Bok coach with Erasmus essentially in charge, despite not having had his annual performance review yet.

This would mean the "indignity" of reporting to Erasmus, a coach he considers "less competent", Netwerk24 reported.

"... should I wish to remain in SARU's employment' I will be reduced to a ceremonial coach' and further that [Erasmus] has already been employed to replace me and is already performing the duties of the Springbok Coach," Coetzee wrote.

"Should I be reduced to the position of a ceremonial coach I would have to face the indignity of reporting to Rassie. I also find it deeply reprehensible that' notwithstanding the fact that I have at all relevant times displayed the utmost good faith towards SARU' SARU has not' as a minimum' returned the favour."

Coetzee, who succeeded Heyneke Meyer as Bok coach in April 2016, oversaw South Africa's worst-ever year in 2016 - including record defeats to Ireland, Italy, Argentina and the All Blacks.

Steve Hansen's side put 57 points past the Boks in both 2016 and 2017, handing the two-time world champions their biggest margin of defeat in history - the 57-0 drubbing in Albany last year.

"There is a general view among SARU ranks that the intention was always to replace Heyneke Meyer with Rassie, but SARU wanted to avoid any controversy regarding race," Coetzee wrote, according to Netwerk24.

"A strategy was developed to use me as a coloured person to conceal the end goal - by offering me the job as Bok coach - but to not equip me with the necessary resources to adequately perform my tasks. It would lead to me vacating my position earlier in order for Rassie to eventually be appointed.

"This strategy is not in line with SARU's strategic transformation plan. It's distasteful to say the least, to use me as a black South African as a pawn in such an untenable manner."

The 54-year-old insists he was set up to fail.

"I was the most successful Super Rugby Coach at the time of my appointment and was requested to return to Springbok rugby from Japan because my country needed me.

"My treatment since my return suggested that elements in SARU embarked on a deliberate attempt to undermine me from the word go and to create the public impression of incompetence on my part whilst wilfully obstructing my efforts to be successful," TimesLive reported.

"I will not allow elements in SARU to wilfully destroy me and render me unemployable as was done to [controversial former Bok coach] Peter De Villiers.

"I am not interested in money and I will fight to protect my hard-earned reputation which is in the process of being deliberately soiled publicly by elements within SARU."

Coetzee was reportedly given - and ignored - a deadline of Wednesday (NZT) to accept SARU's offered severance pay.