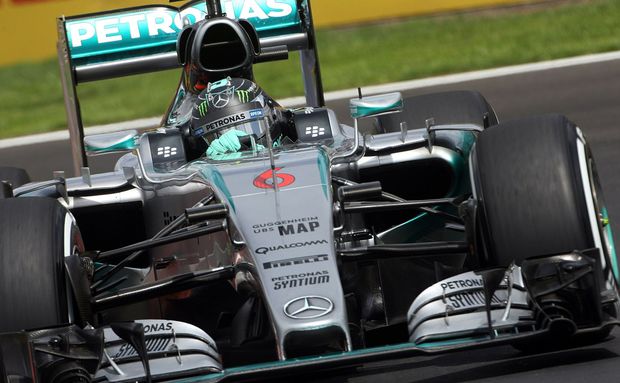 The German, who is chasing his fifth victory in a row after winning Formula One's season-opener in Australia and the last three races of 2015, led both of Friday's sessions with his triple champion teammate Lewis Hamilton second.

Hamilton, winner for the past two years in Bahrain, was the only other driver to lap below the 1:32 mark, with a best effort of 1:31.242.

McLaren's Jenson Button produced a third best time of 1:32.281 on the super-soft tyres.

Ferrari's Kimi Raikkonen had been third fastest in the afternoon practice, a hefty 1.834 off Rosberg's pace on the same soft tyres as the Mercedes pair.

Red Bull drivers Australian Daniel Ricciardo and Russian Daniil Kvyat were fourth and fifth in that same session, but Toro Rosso's Max Verstappen and Raikkonen filled those places in the evening.

Ricciardo came in ninth in the second session, clocking a time of 1:32.870.

Ferrari's Sebastian Vettel, third in Australia, was sixth, but pulled off the track and stopped late in the second session with a loose wheel.

Belgian Stoffel Vandoorne got to grips with the McLaren ahead of his Formula One race debut as stand-in for the injured Fernando Alonso and was 18th on the 22-driver timesheet in the first session.

The rookie moved up to 11th after another 30 laps in the second practice.

Spaniard Alonso was ruled out on Thursday, after failing to pass a medical following his big crash in Australia, and could also miss the following race in China on April 17.