The veteran batsman Hashim Amla has announced he's stepping aside as South Africa's test cricket captain with immediate effect, a day after a double century rescued his country from possible defeat in the second test against England. 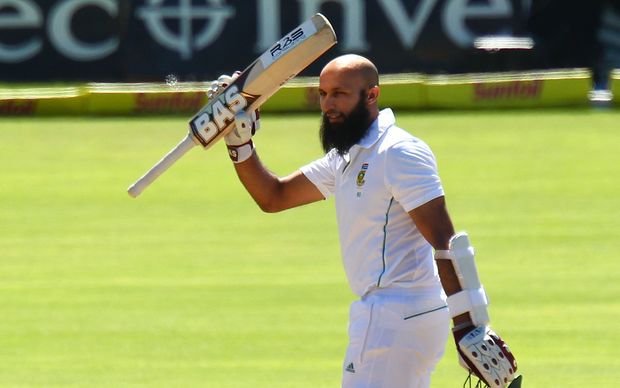 The 32-year-old made the surprise announcement this morning, just minutes after the second test against England in Cape Town ended in a draw.

"Naturally this decision is not an easy one but the more I think about it the more I believe I can be of greater value to the Proteas as a fully focused batsman and senior player at this time or rebuilding our team," Amla told reporters after the match.

"I am deeply grateful and privileged to have been the test captain and I wish to thank Cricket South Africa for the honour of captaining my country. It was enjoyable and indeed a great learning experience.

"I kind of felt someone else could do a better job. I made my decision two weeks before the first test against England," Amla added.

The Durban-born batsman, who made his debut against India in 2004, is a veteran of 90-tests and has scored over 7,000 runs in the longest format of the sport.

"We respect Hashim's decision and the manner in which he thought about it and then communicated with me," Cricket South Africa chief executive officer Haroon Lorgat said.

"He still has a huge role to play in shaping the success of our team without the need for a leadership title. He is just that type of a person and we are very fortunate to have him in our stable."

Poor weather brought a limp end to a compelling second test as England survived a final day onslaught from South Africa to draw the match and keep up their 1-0 lead in the four-match series.

England were 159 for six in their second innings, with Jonny Bairstow (30) and Moeen Ali (10) unbeaten, before drizzle and bad light halted play soon after tea.

South Africa's quick bowlers made inroads early in the day to offer the likelihood of a remarkable come-from-behind victory after England had dominated the opening two days to amass 629 for six declared in their first innings.

South Africa clawed back over the next two days, keeping England in the field on hot, energy-sapping days as they slowly regained a foothold and eventually declared just two runs short of the visitors' total.

A four-wicket burst before lunch today suddenly offered the tantalising possibility of a result and two more in the second session brought South Africa even closer to scuttling out England before chasing down a modest target.

But dogged resistance from Bairstow and Ali, in an unbroken 43-run partnership, and the gloomy weather dashed South Africa's hopes of pulling off a remarkable victory.

England started the day on 16-0 in their second innings, with a lead of 18 runs, but captain Alastair Cook was strangled down the leg side and caught by wicketkeeper Quinton de Kock off Kagiso Rabada's bowling with just the eighth ball of the morning.

He went for eight with England having added a single to their overnight total.

Alex Hales (5) was then snagged by a brilliant diving one-handed catch from Chris Morris at slip to give Morne Morkel a deserved wicket after some fiery bowling.

Joe Root was caught in the slips by AB de Villiers off Morkel on 17 but television replays showed the bowler had stepped over the line.

But England's top-ranked batsman failed to capitalise on the reprieve and scored 12 more runs before being bowled by Morris to leave England on 55-3.

Nick Compton (15) fell 10 minutes before lunch after playing straight to Faf du Plessis at short mid-wicket as he became the first of three victims for Dane Piedt.

After the interval, the off spinner dismissed Ben Stokes, caught at deep square leg for 26, and James Taylor, who got a nasty bounce up onto his gloves and was caught by Temba Bavuma at short leg for 27.

The third test will be at the Wanderers in Johannesburg from Jan 14-18.

England won the first test in Durban by 241 runs.