NASCAR motor racing champion Kurt Busch, testifying about a request for a protective order against him, said his ex-girlfriend is a trained assassin sent on covert missions who once returned to their hotel room in a blood-splattered evening gown. 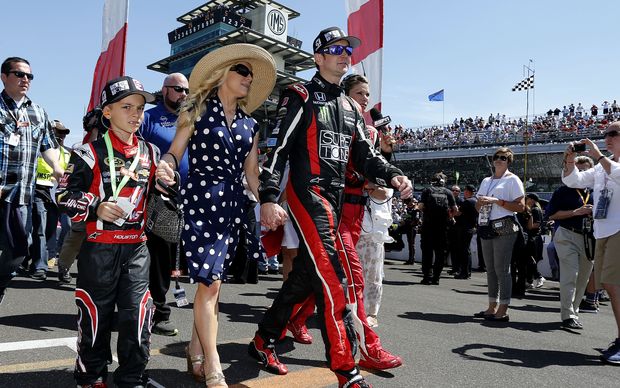 Busch is casting Patricia Driscoll as a jilted lover who wants to destroy the race car driver's reputation.

Busch told a Delaware court "Everyone on the outside can tell me I'm crazy, but I lived it on the inside."

Busch, a winner of 25 races and the NASCAR champion in 2004, said he and Driscoll were once in El Paso, Texas, where Driscoll had left that night in camouflage and boots.

She returned to the hotel at which he was staying wearing a trench coat, Busch testified, and under it she was wearing an evening gown splattered with blood and other matter.

Busch said Driscoll was dispatched on missions across Central and South America and Africa.

Driscoll has accused the 36-year-old driver of slamming her head against the bedroom wall of his motorhome while they were at Dover International Speedway. Busch has denied he ever physically abused Driscoll.

Busch, during the four-day hearing, said he ended his relationship with Driscoll last autumn because she was taking up too much of his time and he needed to focus on racing.

Driscoll, 37, runs her own surveillance system company and oversees the Armed Forces Foundation, a non-profit to support the military that has partnered with NASCAR.

It could be weeks before Commissioner David Jones issues a final decision on a protection order.