Veteran Australian supermaxi Wild Oats XI has reinforced her standing as the most successful boat in the 70-year history of the Sydney to Hobart yacht race, claiming line honours for a record eighth time. 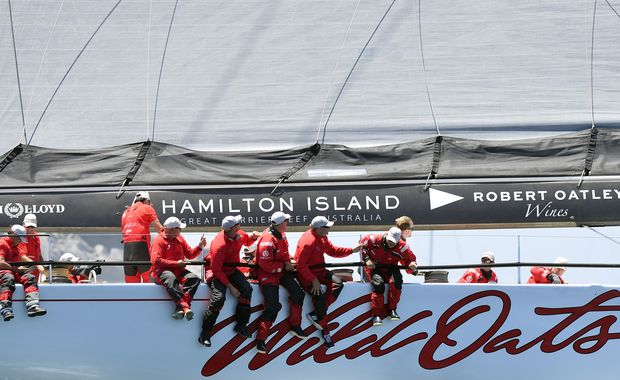 Although well short of her 2012 race record (one day 18 hours and 23 minutes) set in 2012, that was of no concern to Oatley, Richards and the crew aboard Wild Oats XI.

"It's a miracle, an absolute miracle," Oatley said of the eight line honours titles.

"It's just about (the sweetest victory), but they're all sweet."

Oatley said Wild Oats would be back next year and he'd like to push for 10 line honours victories and beyond with the same, much-modified, boat.

"I wouldn't dream of it (replacing her)," he said.

Brand new American supermaxi Comanche was in second position, just under an hour behind Wild Oats.

The high-tech Comanche had been hotly tipped to take out line honours and quickly swept to the lead with a blistering start out of Sydney Harbour on Friday before settling into a tight battle with Wild Oats XI.

The unpredictable Bass Strait weather proved decisive as Wild Oats dealt best with a high-pressure ridge which slowed Comanche at one point to 6.6 knots to be the second slowest among the race fleet.

The Hamilton Island-based Wild Oats XI never looked likely to give up that lead, although Comanbche made up ground, as she tracked down Tasmania's east coast and into Hobart's Derwent River to cross the line just before 3pm local time.