The former Black Caps captain Daniel Vettori's made his national return against Scotland, in a thrilling one day match at Lincoln. 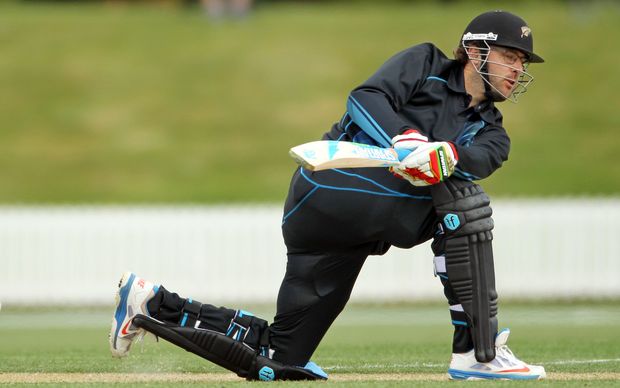 Daniel Vettori batting for the NZ XI against Scotland at Lincoln Photo: PHOTOSPORT

In his first outing for his country in more than a year, Vettori claimed no wickets for 43 runs off his 10 overs.

Earlier, quickfire half centuries from Brendon McCullum and Corey Anderson along with useful contributions from the lower order saved the New Zealanders a few blushes.

Tom Latham was next highest scorer with 39 while veteran Kyle Mills made 33 and Matt Henry was 21 not out.

Meanwhile the South African cricketers arrived in Auckland on Wednesday, and captain AB de Villiers was happy to talk up the Black Caps' chances at next year's World Cup.

De Villiers says he wouldn't call New Zealand dark horses, rather they're one of the favourites - especially in their home conditions - and because they haven't won a big tournament or series for a while, the Black Caps will be very motivated to do well.

And de Villiers is expecting a very competitive series. The one day series begins on Tuesday in Tauranga.