World events including conflict in the Middle East and the spread of Ebola in Africa are making it extremely difficult to forecast dairy prices, Fonterra says. 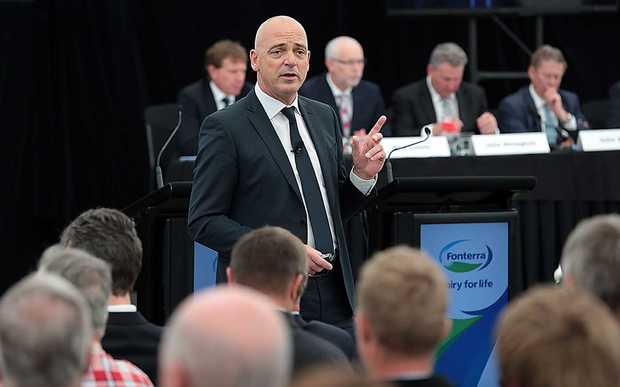 A farmer shareholder criticised the co-operative's marketing strategy at its annual meeting yesterday and questioned how it could set an opening milk price forecast for the season of $7 per kilo of milk solids, when it has now slumped to $5.30.

Fonterra chief executive Theo Spierings pointed out that when it set what it thought was a conservative forecast of $7 in May, the going milk price was close to $9.

However, he said it could not predict the impact that unfolding world events would have on international prices.

"We did not know that a few months later the Ukraine Russia situation escalated, that Ebola hit the world, that IS kind of locked down the Middle East, so we have multiple demand issues around he world which have led to good supply and emerging markets' demand going down.

"And if areas like the Middle East and Africa - and we are selling $2 billion in revenue in those regions - if they are locked down for geo-political problems and the same in Russia locking down for Europe, those are big changes in demand."

A Marlborough farmer yesterday failed in his attempt to trim Fonterra's spending until the milk price improves.

Murray Beach of Havelock put a resolution to the AGM calling on the cooperative to put on hold all overseas investment spending and New Zealand development projects until the payout rises to a minimum of $7 per kilo of milk solids.

"Other milk companies like Sylait, Tatua and Open Country - they are selling their milk products overseas and paying just as good money as Fonterra, without pouring money into overseas investments," he said.

"The board uses the excuse that these transactions are designed to improve the returns to farmer shareholders. What about the billions of dollars we are paying interest on and the money we are paying back off these loans?"

But the Fonterra board, backed by the farmer Shareholders' Council, opposed Mr Beach's resolution.

It said stopping capital spending in New Zealand and overseas would not increase money available for the milk payout, and it needed to build more plants to handle to handle the increased milk supply.

The resolution got less than 20 percent support in farmer votes.

However, farmers did support the Fonterra board's recommendation to hold directors' fees at their current levels, which are $405,000 for the chairman and $165,000 for directors.

The Shareholders' Council chairman would continue to get just under $91,000 and councillors $30,000.