A New Zealand farming leader says he's frustrated that a range of political parties are targetting foreigners and saying they shouldn't be allowed to buy farms. 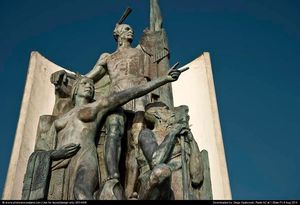 Migrants - such as Kupe - were the making of New Zealand. Photo: PHOTO NZ

Federated Farmers vice president Anders Crofoot bought Castlepoint Station in Wairarapa after moving to New Zealand from the United States in the 1990s and went through the Overseas Investment Commission to do so.

The Labour Party has said that if it wins the general election sales of rural land to most foreigners will be banned.

Mr Crofoot said the anti-foreigner sentiment coming from Labour and several other political parties when it comes to farmland was very short-sighted.

"I find that attitude really frustrating, because it's not even that you're going to run through the process. You're bascially putting a big sign up saying, we're not interested, go away, stay away. And it scares people off, and the skills.

"The entire country is actually immigrants," Mr Crofoot said. "You know, even the Maori came here at one point from overseas, so basically it is a nation of immigrants".

"It is always prized on having new ideas and people coming in, and to put up a big wall and say we don't want anybody else I think is just shooting ourselves in the foot."