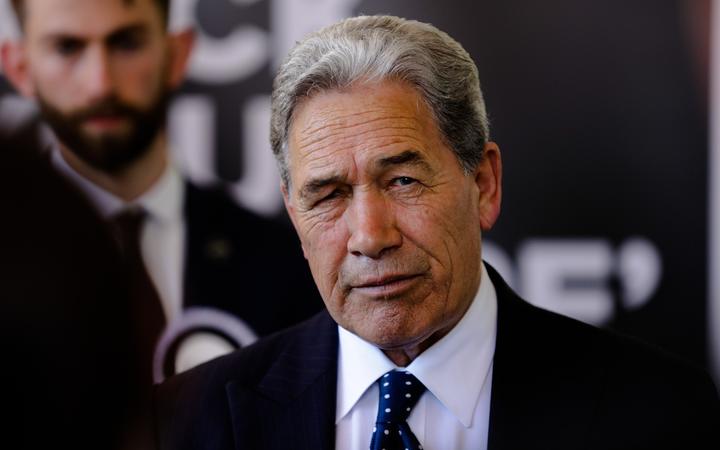 The watchdog has charged two people with obtaining by deception after an investigation into the New Zealand First Foundation.

Neither defendant is a minister, sitting MP, or candidate in the upcoming election (or a member of their staff), or a current member of the New Zealand First party.

A High Court judgement ruled against New Zealand First however, noting that "there is a significant public interest in the New Zealand voting public being informed during an election campaign about criminal charges of serious fraud against people or organisations related to political parties."

Peters told RNZ Morning Report's Susie Ferguson the SFO only conceded no sitting New Zealand First MPs, candidates or party members had been charged because of legal action taken by the party.

"We went straight to court to demand they give us that information about what they were going to say ... a total exoneration, they weren't even prepared to do that and we had to go to court to get that out of them.

"When they wanted to bring it out last week they weren't even saying that the ministers and the members have been exonerated. That was not in their press statement. We had to go to court to squeeze that out of them ... we've got the draft and none of it had exonerated the party or the MPs or the members at all."

He said there was bias against New Zealand First.

"The bias against one political party ... it's just unfair, it's not right and it's not within their rules.

Peters insists the SFO statement has exonerated the party of any culpability or guilt.

"New Zealand First has been exonerated ... the party has been utterly exonerated but you seem to have missed it."

Peters said the foundation was totally separate and has maintained he knew nothing about the donations to it.

However, the court judgment noted that the foundation "is a trust with associations with NZ First, according to NZ First's counsel".

Asked who was paying for the High Court costs, Peters said "we are, you're talking to one of the people who's paying for it".

"The fact of the matter is that a number of us in the New Zealand First Party will be paying the bills for these costs and I don't know what they are and that is the total answer."

Peters criticised the SFO's decision to reveal its in April its timeframe for the investigation into the foundation.

The High Court judgment noted there was no evidence that the SFO director's decision was politically motivated. It also quoted the SFO director rejecting differential treatment.

"The assumptions upon which you proceed in this regard are baseless. We note that the NZFF investigation was announced on 18 February 2020 and it was not until 21 April 2020 that a statement was made regarding the timeframe for the completion of the investigation.

"We will be making decisions about the New Zealand First Foundation matter in accordance with our usual processes ... the media release relating to the Labour investigation is on the SFO website. It was published there on 13 July 2020."

Based on the judgment, the public value of releasing the information ahead of the election is about transparency, but Peters disputed that.

"This is so risible and so laughable ... if the truth of the matter transparency's important then so should Labour's investigation be important.

"If that's the truth why isn't it about the transparency into the Labour Party, and the investigation into their 2017 which the SFO is doing, why is it not essential for transparency in their case?"

The SFO is also investigating the Labour Party over donations in 2017, and funding for the Christchurch and Auckland mayoral campaigns. Another investigation over National Party donations from 2017 is before the court, with former National MP Jami-Lee Ross, who is now co-leader of the Advance NZ Party, facing charges of deception alongside Zhang Yikun, Zheng Shijia and Zheng Hengjia.

The investigation into the New Zealand First Foundation was initiated by the Electoral Commission late last year, which referred the matter to police in February saying that it had formed the view that the New Zealand First Foundation had received donations that should have been treated as party donations. Police referred it to the SFO that same day and the SFO officially announced an investigation a week later.

The SFO investigation followed revelations by RNZ and Stuff that the foundation received donations from entities connected with some of the country's wealthiest people in the business, fisheries and horse racing worlds.

None of those donations were declared in the party's electoral returns but the foundation spent more than $425,000 between April 2017 and August 2019 paying bills for the New Zealand First party, including advertising expenses, fees for political consultants, rent, establishing a party HQ and running its website.

National Party leader Judith Collins said the timing of the announcement by the Serious Fraud Office would have been criticised by New Zealand First leader Winston Peters either way.

"If they waited until after the election then they'd be criticised for not, as he called it, 'exonerating' him."

She said Peters was on his "last leg when it comes to politics".

The National caucus made it clear they did not want a bar of him, she said.

"At the last election he chose to go with Labour and the Greens - it's his choice - but ultimately he is someone who I think his time in politics has come to an end."