New Zealand First leader Winston Peters says the Serious Fraud Office's announcement on its investigation into the New Zealand First Foundation is a relief after months of a cloud hanging over the party.

This evening, the SFO filed a charge of 'obtaining by deception' against two people following its investigation into the New Zealand First Foundation. They have interim name suppression and are not a minister, sitting MP or candidate in the upcoming election, or a current member of the NZ First party.

"It's a relief after months of this cloud hanging over this party that we have been fully cleared," Peters told media.

"While we respect its independence, the SFO cannot justify its timing."

"The foundation is an entirely separate entity from the NZ First party but that will be lost on some and deliberately confused, sadly, by others."

New Zealand First went to court to try to stop the Serious Fraud Office from announcing the outcome of its investigation into the New Zealand First Foundation before the election - but failed.

The charges were laid by the Serious Fraud Office last Wednesday, but New Zealand First went to the High Court to attempt to delay the announcement until a new government has been formed after the election.

In a judgment, released today, Justice Palmer said New Zealand First's case was not particularly strong, and there was no evidence the SFO's decision to issue the public statement was influenced by political considerations.

Justice Palmer said the public interest in transparency outweighed the inconvenience of the announcement to New Zealand First.

"I consider there is a significant public interest in the New Zealand voting public being informed during an election campaign about criminal charges of serious fraud against people or organisations related to political parties," he said.

As a result, he declined New Zealand First's application for an order delaying the Serious Fraud Office's public announcement.

Peters says NZ First will take legal action against the SFO in the High Court.

He took issues with SFO investigations into National and Labour and where those were at.

"Neither I nor any other party is allowed to make any further comment on this issue because it is now subjudice."

He says the party has been through "months" of interviews and examinations that have consumed time and caused difficulties.

Peters was not interviewed but given questions to answer.

Peters would not say if the thought the investigation would have an impact on voting.

He says it is not clear why the SFO announced it would make a decision before the election.

"We do not believe that in any way that this, according to the law, is acceptable," he says.

"The SFO needs to explain to you why there's not the same priority where the other investigations (it is conducting) are concerned.

"It has provided enormous stress and strain on the party month after month."

He says the impact on the election will depend on how the media reports on the issue.

The SFO told Peters on 23 September it would be making an announcement, but it would not tell him what it would be, he says.

Peters would not answer any questions about who the two people charged were, saying "that's subjudice".

"The reality is this is a very expensive business but in the end honour, integrity and fairness is worth defending," Peters says of his legal challenge of SFO actions.

University of Otago law professor Andrew Geddis says NZ First is in the clear "in the sense they haven't been charged with any criminal activity".

"Now of course if the bar for our politicians is 'I am not a crook and I am not undergoing any criminal charges', if that's as much as we expect of them, then they have been exonerated.

"But, the reality is the New Zealand First Party set up this foundation as a shadow way of gaining donations, of gaining the money to run the party and now two of the people involved have been charged with criminal activity because it is clear to anyone who looked at this from the outset that what they were doing was in breach of Electoral Law and they have been caught."

Geddis says Peters is right that there cannot be speculation over who has been charged because there is name suppression.

"But in terms of discussing the outline of the case, discussing the background facts and so on, those are all on public record. Subjudice is something people throw around when they don't want to talk about an issue, it doesn't mean you can't talk about anything to do with the case."

The charges the pair face are "obtaining by deception".

Geddis says it seems the SFO is saying the way the money was flowing into the NZ First Foundation breached the Crimes Act.

He says the Foundation and how it is set up is "unprecedented".

"This was a foundation where people would put money directly into the foundation rather than give it to the party. Because it was being put into the foundation it was not being declared to the Electoral Commission as required and then the money was being spent on New Zealand First activities rather than the party spending its own money. So it was like a shadow parallel funding structure that paid no attention to electoral law even though it out to have."

Geddis says it's very hard for NZ First and the foundation to be separated because the foundation was set up by the party, which then benefited from it.

As for the proceeding NZ First has ordered its lawyers to launch in the High Court against the SFO, Geddis says: "Attack is the best form of defence, right. Charges have been brought by this organisation, so probably the best way to undercut the political impact of that is to make out that there's some wrongdoing or nefarious action by this organisation, so ... they'll be hoping to change the narrative."

Geddis says it is "pretty clear" electoral donations need to be reformed.

Back in April, the SFO said it was on track to make a call before this year's election on whether to lay charges in relation to the investigation into the NZ First Foundation, which had been bankrolling the NZ First Party.

The issue centres around allegations the foundation received donations it should have treated as party donations. 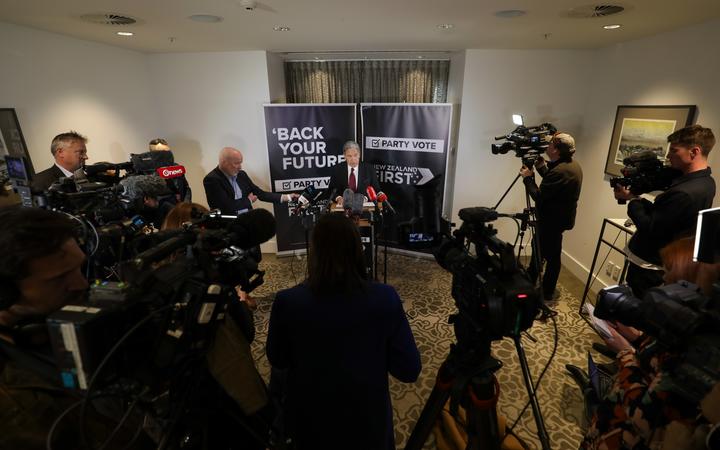 Here's how the issue has unfolded:

What media reports revealed about the NZ First Foundation

Revelations by RNZ and Stuff showed that the foundation received donations from entities connected with some of the country's wealthiest people in the business, fisheries and horse racing worlds.