An overly strict focus by the police on speeding leaves motorists focussed on their speedos and not the road, the Police Minister has told Parliament. 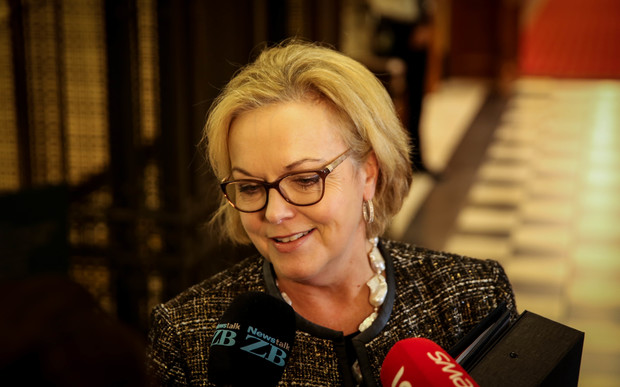 Judith Collins said drivers were being distracted by the fear of being ticketed by the police. Photo: RNZ / Elliott Childs

Millions of dollars are spent on advertising campaigns in New Zealand telling motorists that their speed affects others and to slow down.

The police clamp down on speeding through holiday periods, ticketing drivers who exceed the speed limit by more than 4km/h.

But Miss Collins told reporters she doesn't like seeing motorists who are doing 55 in a 50 zone being ticketed.

During Parliamentary Question Time yesterday she said drivers were being distracted by the fear of being ticketed by the police.

But a road safety expert told Morning Report there was no evidence to support the Police Minister's claim.

Associate Professor Samuel Charlton of Waikato University, a specialist in driver behaviour, said it was an interesting idea but he was not aware of any research in this area.

He said it was more usual to find that drivers did not know what speed they were going at.

"Far more often, they are not sure what speed they are going, and they aren't really sure in urban areas what the speed limit is. So that's probably a bigger issue than worrying about staying within a one or two kilometre an hour tolerance of the speed limit.

Prof Charlton said even small shifts downwards in average speed had a big impact in lowering fatality and crash rates.

Mrs Collins said that redeployment had not happened yet.

She said motorists needed to take more responsibility for their actions, and that she personally saw a lot of male drivers using cellphones.

Labour's police spokesperson Stuart Nash asked the minister if blaming male drivers was a political diversion to cover for the reduction in the number of police on the roads.

"Is she aware that according to official statistics cellphone use contributed to only 0.05 percent of all fatal or serious injury crashes, and if so why did she blame men on cellphones for the increased road toll?"

This year the United Future leader Peter Dunne laughed off the two separate speeding tickets he received on one day in March for doing 55 in a 50km/h zone - saying it was no big deal.

Police say a pedestrian hit by a car at 40 kilometres per hour has a 70 percent chance of survival, but at 45km it was just 50 percent.