The Housing Minister is defending plans to free up Crown land in Auckland to build new homes amid claims most of the sites are totally unsuitable. 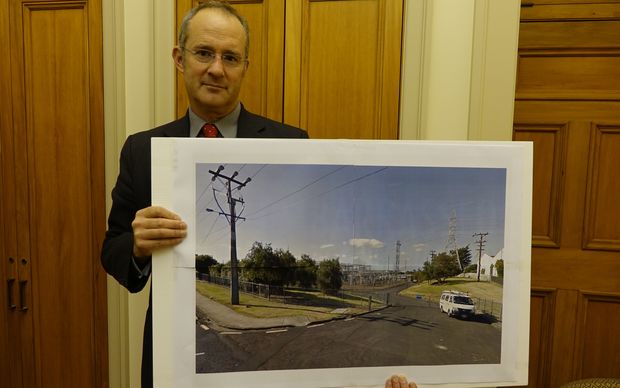 Labour's housing spokesperson Phil Twyford holds an image of a power sub-station in Auckland he says is on Crown land the Government plans for development. Photo: RNZ / Amelia Langford

The Government last week announced it had identified several hundred hectares of Crown land that could be developed for new Auckland housing.

The Labour Party has accused the Government of planning to build on land that includes a power sub-station, pylons, a cemetery, a fire station and school playing fields.

Labour's housing spokesperson Phil Twyford said he understood from multiple sources only a quarter of the 500 hectares of land the Government wanted to use was suitable for building on.

That included a block of land featuring a power station in the Auckland suburb of Glendene, he said.

"This is a massive piece of electricity infrastructure - huge voltage going through this plant - in fact, a year and a half ago there was an explosion there, a major fire, that caused a power outage across most of Auckland."

Mr Twyford said Housing Minister Nick Smith and his officials had not consulted with the Government agencies that owned the sites up for development.

He wanted Dr Smith to release the full list of sites so the public could make up their own mind about the Government's plans.

"I think this is a classic overcooked Nick Smith photo op and publicity stunt that was pulled together hastily, cobbled together at the last minute, so the Government could announce something before the budget to make it look as if they are doing something about the Auckland housing crisis."

Dr Smith said the site Mr Twyford referred to had a sub-station in one corner but there were three hectares of vacant land available.

But he admitted a large amount of work was still to be done to check which sites were viable and he would not release the full list yet.

"It is true that Government officials have been sieving through large areas of land. The areas that Mr Twyford has identified are not on any of the lists that have been provided to me by officials."

He also strongly rejected Labour's claim that most of the sites were unusable.

"My view is look, there's 150,000 hectares of public land in Auckland [and] I'm very confident that we are going to be able to identify 500 hectares."

When asked whether he would be happy to live by a sub-station, Finance Minister Bill English was quick to make a retort.

"Well, I presume it's not always exploding and presumably Vector has some responsibility to make sure their sub-stations don't explode."

Such matters would be worked through during the consenting process, he said.

The 500 hectares was an estimate by officials, who were now going through title by title.

"The general point here is that there is vacant Crown land in Auckland.

"The Government is gearing up to build on it. It seems a bit odd that the Labour Party is running a campaign against it when they have been advocating that policy for some time."

Dr Smith said he would announce the first batch of sites for development on Friday.