The Finance Minister has conceded that lower inflation makes it less likely the Government will get its finances back into surplus this financial year. 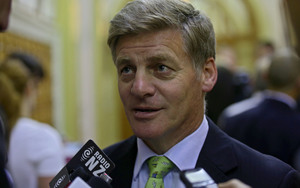 In the eight months to the end of February the Government recorded a deficit of $269 million - much lower than the Treasury forecast last December.

While the deficit was lower, it represents a reversal from the previous month when the public accounts recorded a slim surplus for the first seven months of the financial year.

Mr English said GST income was down, partly because low inflation had led to lower-than-expected spending on goods and services.

That makes it unlikely the surplus target would be achieved this year.

Mr English said the Government had come a long way since the 2010/11 year when it recorded an $18.4 billion deficit.

The lower-than-expected deficit, which excluded investment gains and losses, was mainly due to government spending being lower than forecast, Treasury said.

Tax paid by individuals and companies was also higher than expected but offset by lower income from GST.

While the Government's deficit figure for the eight months to the end of February looks better, its net worth was almost $2 billion lower than forecast at $74,507,000.

The Green Party said the Government should be deeply embarrassed it would not get its finances back into surplus this financial year.