A group representing Australian convenience store chains claims plain packaging for cigarettes has increased sales, rather than reducing them. 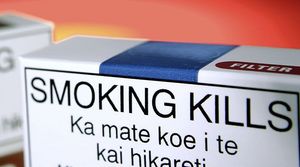 "What we're seeing is actually a decline in some of the premium-type products and the mainstream products, and there's been a huge shift to the cheaper end, where brand has become less important and people are buying cheaper packs more often," Mr Rogut said.

But Associate Health Minister Tariana Turia, author of the Smoke-free Environments (Tobacco Products and Packaging) Amendment Bill), said she did not accept that argument.

"Why are the tobacco companies, and why are the convenience stores, opposed to the legislation," she said.

"Wouldn't you think, that if what he is saying is true, they would embrace it if it meant that their profits would go up? I'm sorry, I don't buy it."

Some of the association's members are tobacco companies which pay membership fees.

Mrs Turia said she expected the bill to be passed into law by the end of the year but Prime Minister John Key said that would not happen until a legal challenge to similar legislation in Australia had been resolved.

However, Green Party co-leader Russel Norman said New Zealand should push ahead with the legislation.

Dr Norman told Morning Report another issue was that the legislation might not survive the Trans-Pacific Partnership negotiations now under way, which covered tobacco company investment.

As well, there were precedents where governments had been sued for hundreds of millions of dollars by companies who claimed they had been damaged by legislation to protect the environment.

Mr Groser said the New Zealand legislation needed to be robust enough to stand up in a court of law.

Mrs Turia said it was not for tobacco companies to be dictating what was done in New Zealand, which had a sovereign and legal right to protect its citizens.

Meanwhile, Mr Key said the Government had no intention of passing legislation to ban smoking in cars - a prospect raised by Mrs Turia.

Some political parties were interested in such a move but it was not on the Government's agenda, he said.

Strategies such as price increases, education and plain packaging were the most effective, and smoking rates were continuing to drop.