The internet millionaire Kim Dotcom says there is no question in his mind that John Banks knew he had donated $50,000 to his 2010 mayoral campaign.

The opposition is continuing to pursue the ACT Party leader and government minister over the two $25,000 donations, which Mr Banks declared as anonymous.

Last week police found there was insufficient evidence to prosecute Mr Banks for the donations, which he solicited but did not disclose because they were deemed anonymous.

Mr Dotcom says he has no doubt Mr Banks knew it was him who had made the donations.

He says Mr Banks confirmed that he had received them in phone calls to both himself and his bodyguard.

Mr Dotcom says the Prime Minister has obviously made up his mind to protect Mr Banks. 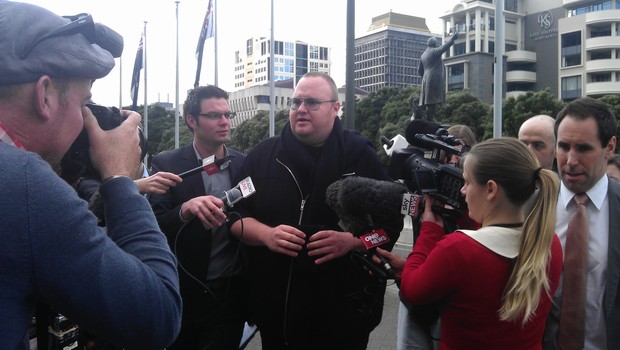 Mr Dotcom says while it's clear to most New Zealanders that there's something unethical going on, it's now time to move on.

He says he went public about the donations because he was hurt by John Banks denying he knew him well, after he thought they had formed a close relationship.

Mr Dotcom says he would have visited regardless Parliament of the Banks donations controversy.

He told reporters the pair will not be meeting.

"Well, I would like to see what's going on in Parliament today, and just you know check it out. I would have come here anyway even if there was no Banks issue; I just wanted to see it."

Prime Minister John Key says he has no desire to meet with Mr Dotcom. He says although he is nonchalant about Mr Dotcom's visit to Parliament, the two would not be meeting up.

Files released by police last week contain sworn statements from Mr Dotcom, his bodyguard and his lawyer that contradict Mr Banks's insistence he didn't know the origin of two $25,000 donations.

Police found insufficient evidence to lay charges. They did find he had signed off on a false return, but police said they were unable to take action because they could not prove he had done it knowingly, and the complaint had been laid outside the requisite six months.

US authorities are seeking to extradite Mr Dotcom, the co-founder of file-sharing website Megaupload, to face charges relating to a major internet copyright prosecution.

The Prime Minister says he has not read the police report, and has no intention of doing so, but says he accepts Mr Banks's word that he complied with the law.

"There is a lot more to go in this and Mr Banks and Mr Key will have to continue to answer questions because they have failed to set an acceptable standard for ministerial behaviours."

The ACT Party president says he sees no reason why the board wouldn't give John Banks its full endorsement if he wants to stand again at the 2014 election.

President Chris Simmons says the board fully backs Mr Banks and will endorse him if he decides to stand for Parliament again.

"We're going to be looking very closely at how we develop a very, very good and strong team to put before the electorate in 2014.

"Who will be on that team is still up for debate, but I can be absolutely certain that John Banks will be right in the middle of that."