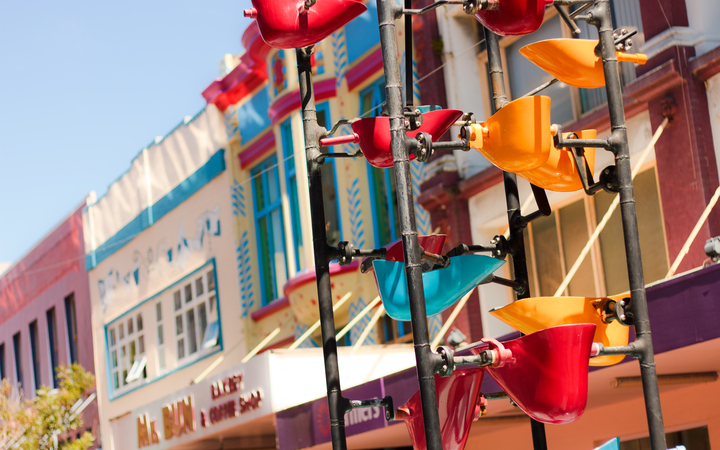 Wellington's Cuba Street, pictured, seems to have got through relatively lightly. Why? Photo: Flickr / Aidan Wojtas

Remind me what structural engineers do?

We design the "bones" of a building, the beams and columns and big structural walls that a building needs to stand up, and the things it needs to resist sideways loads (wind and earthquakes).

What are they coming to check?

After the earthquake, we are coming to check that this building skeleton hasn't been damaged. This is why sometimes we need to pop ceiling tiles or look behind GIB walls.

In an earthquake each floor of a building moves differently to the ones above and below it. This means that things like stairs, ramps or walls that go from the top of one floor to the underside of the one above it might get pulled in different directions.

Some buildings might be shut even if the shell is undamaged, because the things that are added later - water pipes, ceilings, cupboards - have all been shaken around and broken. As you can imagine, it can take a while to clean up if the sprinklers have lost all their water over your desks.

Why has there been damage?

We currently design typical buildings to remain standing in a one in 500 year earthquake, and to not have any damage in an earthquake big enough to happen on average once every 25 years (a one in 25 year earthquake.)

So, after a 1/25 year earthquake, you should be able to get to go to work the next day as per normal, but if it's bigger, then building owners may need to do some repairs first.

The government decides for us as engineers, and so by extension society as a whole, where these "no damage" and "not falling over" lines are, as a balance between safety and cost.

If you wanted a new building, by the way, we would design it to last 50 years - that is, to have a design life of 50 years.

What happened in Wellington? And why didn't Cuba Street fall down?

Every building reacts/shakes differently depending on how tall and stiff it is, and what soil it is on. Tall buildings move back and forth much slower than shorter stiffer ones.

And buildings that are on rock generally shake less than ones that are on metres and metres of soil. Think about a bowl of jelly, it keeps wobbling after you finish shaking it.

It appears that the short sharp earthquake waves didn't make it to Wellington; so most of the little buildings, like along Cuba Street and people's houses, didn't feel much of the shaking. The longer waves did travel up from the South Island, and shook the taller buildings more.

Let's look at a graph to explain this.

This is one of the charts we use to tell us what happened in the earthquake, produced by the University of Auckland. Up the side is effectively the amount of shaking, and along the bottom is a measure of a building's period - basically, how long it takes to move to one side and back again. The short buildings are on the left, moving through to taller buildings on the right.

The thick blue line is a 1/500 year earthquake, which we design to, and the thick red line is the no-damage line (that is, the 1/25 year earthquake line). The two design lines shown here are the ones for Wellington sites on deep soil. The design lines for other places around the country are usually lower. Auckland's is about a quarter of this, for example. 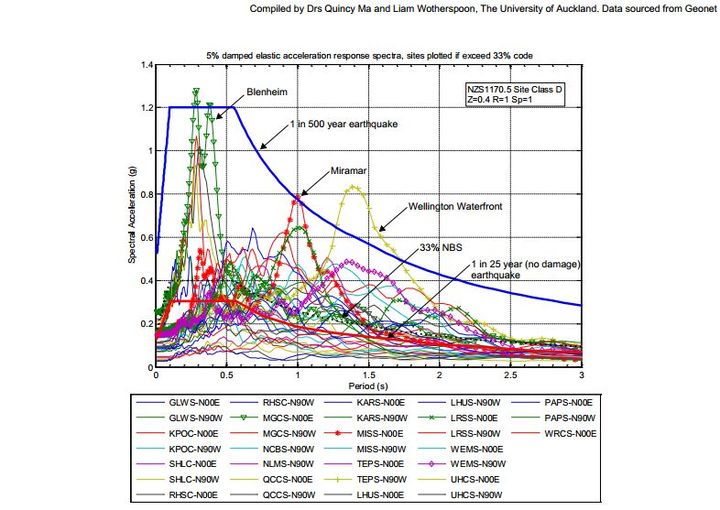 Ground motion information: how much will buildings have moved, compared to what they've been designed for (5% damped elastic acceleration response) Photo: University of Auckland (compiled by Quincy Ma and Liam Wotherspoon) / GeoNet (data)

All of the colourful squiggles are from different recording stations around the country. You might remember seeing images of earthquake readers, which make those wavy lines; experts take that information and turn it into these, which tell us what the shaking was like in different places.

As you can see, for short buildings and very tall ones, the lines are quite low: not much shaking happened. But for the middle ones, they are quite high, and above the "no damage" 1/25 year earthquake line.

Different places around the country and even around the city had different levels of shaking, and the shaking varied in different directions. The red star line is Miramar, the yellow cross line is Wellington's waterfront and the green triangle line is Blenheim.

So you can see it's complex, and we can't just say "below this number on the Richter scale, everything is sweet".

Every earthquake that happens is different, and the lines from the Christchurch earthquakes looked different again to these.

The two design lines in this graph are from our current earthquake code, which started in 2006. When we talk about a building being a % NBS, we mean that the bones of the building can withstand that much proportion of this line. Before 2006, this line was in most cases lower, and that is one of the reasons that some buildings now need to be strengthened.

The black dotted line is 33% NBS, and buildings that fall below this line are known as "earthquake-prone". As you can see, it is much more likely that the colourful earthquake lines will be above this one.

The way that we currently design buildings for earthquakes is by trying to pick which bits of the building will fail first. This method has only been around since the 1960s, and it is changing and improving all the time. We have learnt things since Christchurch and this earthquake will also teach us things.

Unfortunately, it is not as easy as just punching lots of numbers into a computer and having it split out the answer.

Why don't engineers tell me my building is "safe"?

We never use the word "safe". No building is completely risk-free, and there is no such thing as earthquake-proof. Some buildings are much better than others, in the same way a car with airbags is better than one without them, but both cars can still crash or be crashed into. There is always the possibility of an earthquake happening that is bigger than what we design for.

Everybody has different appetites for risk. We can only tell you if we think your building is more damaged than it was two weeks ago, before the earthquake, and then you have to decide if you are comfortable with that. Safe is a black and white word, and we are dealing with a spectrum.

Should I go live in the middle of an empty field?

It might all feel a bit scary, all this uncertainty and waiting for aftershocks, but it is good to remember than earthquakes are only one small bit of risk in our lives. Three hundred people die every year on the road, but we don't usually get too scared hopping into the car. We might be good drivers but there are some terrible ones too. Earthquakes are a bit like terrible drivers: they could be around the next corner, or we could be lucky enough not to encounter one.

Remember that undamaged buildings don't make good TV, and boring serious facts aren't good clickbait, so media coverage is also going to be a bit skewed towards the "scary".

Unfortunately, we aren't able to stop earthquakes, or even predict them yet, so we just have to try and live with them.

Nicki Vance grew up in Wellington, studied civil engineering at Canterbury University and has been back in Wellington working as a structural engineer at Dunning Thornton since 2011.